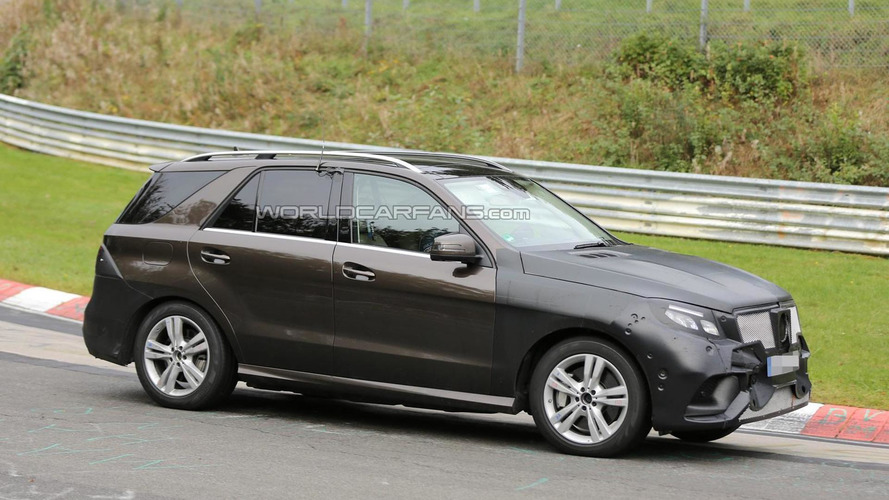 A prototype of the facelifted Mercedes-Benz M-Class has been spied undergoing testing on the Nürburgring.

A prototype of the facelifted Mercedes-Benz M-Class has been spied undergoing testing on the Nürburgring.

Mercedes-Benz's mid-size SUV is about to receive a mild facelift which will bring subtle styling tweaks to both front and rear fascias. Expect the headlights to mimic those of the C- and S-Class models, along with a slightly altered front grille and different air intakes. Judging by the camouflage this prototype was wearing, the taillight graphics will also be revised while the rear bumper is going to be modified as well.

Speaking of the rear bumper, you will notice that on the right side there's a small cap which can only mean we are dealing with a plug-in hybrid version that will allegedly return 50 mpg US (60 mpg UK or 4.7 liters / 100 km). Power will likely come from a turbocharged V6 3.0-liter working with an electric motor as seen in the S500 Plug-In Hybrid where the conventional engine puts out 328 bhp & 480 Nm whereas the electric motor produces an additional 107 bhp & 340 Nm.

The facelifted Mercedes-Benz M-Class will reportedly be unveiled in the fall of 2015 and could adopt the GLE moniker as a reference to the similarly-sized E-Class. It will be followed shortly by the GLE Coupe (ML Coupe) which will act as a competitor for the BMW X6.