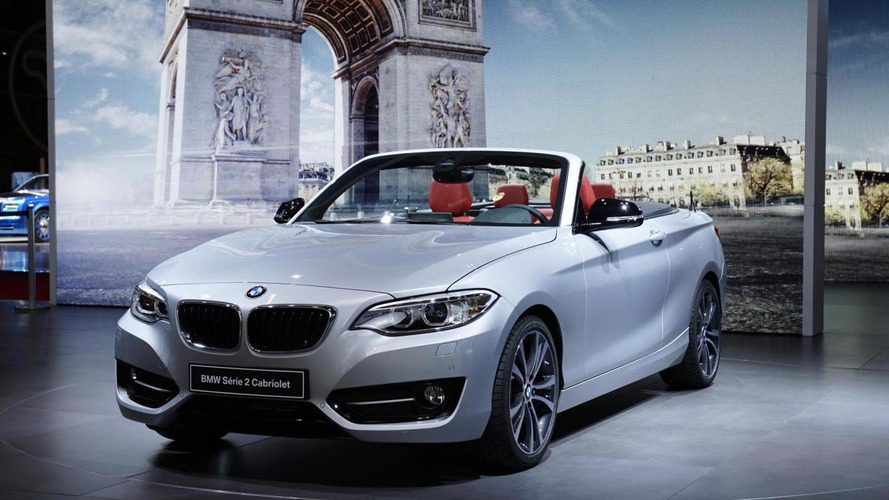 BMW has introduced today in Paris the first ever 2-Series Cabriolet which will go on sale towards the end of February next year.

BMW has introduced today in Paris the first ever 2-Series Cabriolet which will go on sale towards the end of February next year.

The smallest open-top BMW has arrived in Paris with a multi-layer fabric roof that needs 20 seconds to open or close at speeds of up to 50 km/h (30 mph) and can be ordered with a black, brown with silver effect or an anthracite with silver effect finish. Compared to the defunct 1-Series Convertible, the new model benefits from extra insulation which has slashed interior noise by 5 dB in the front and 7 dB at the back.

Other than that, this is essentially a 2-Series Coupe with an identical engine lineup including a four-cylinder 2.0-liter offered with 184 HP and 245 HP along with a 2.0-liter turbodiesel rated at 190 HP. Sitting on top of the range is the M235i Convertible packing a larger six-cylinder 3.0-liter generating 326 HP and 450 Nm which propels the compact Bavarian cabrio to 62 mph (100 km/h) in 5.2 seconds or in just 5 seconds when equipped with the optional eight-speed automatic gearbox.

Larger than the model it replaces, the 2015 BMW 2-Series Convertible has a 9 percent bigger trunk with the roof in position and 7 percent larger when it's folded. The trunk's opening area is now 1.4 inches bigger and according to BMW you can now squeeze in a couple of snowboards or two 46-inch golf bags.

In terms of pricing, the US-spec version begins at $38,850 for the 228i and from £29,180 in UK for the 220i. Customers will start receiving their cars by late February 2015 and select versions can be had with an optional xDrive all-wheel drive system.