However, Hyundai is incentivizing dealers to clear out their stock.

The Hyundai Veloster has always been an oddity. The three-and-a-half door hatchback wiggled its way into consumers' hearts a decade ago, though sales have only fallen since 2016 as larger crossovers and SUVs gained in popularity. Mounting evidence suggests that Hyundai could be considering killing off the funky model, according to a new Cars Direct report, which looked at the incentives or lack thereof that the automaker is offering on the car.

The publication discovered that the standard Veloster lacks any incentives from the automaker as of April 1 – no rebates, no lease deals, and no APR incentives. However, Hyundai is offering a Final Pay incentive, a special one designed to help dealers clear out stock, which looks to be working. Cars Direct found it "almost impossible" to find the model in stock, discovering around 200 Velosters for sale nationwide, many of which being the hotter N variant. Hyundai is continuing to offer incentives for that model, though.

Hyundai Reassures Veloster Is Here To Stay But With Simplified Lineup

Cars Direct reached out to Hyundai about the model's future, though it received a tepid response. The company said that it has 2021 model year Veloster, Veloster Turbo, and Veloster N models "in dealer/port stock." Last year was difficult for the entire automotive industry due to the coronavirus pandemic, though Veloster sales tanked by nearly 50 percent from 2019, falling from 12,849  to 7,581. That's a drop in the bucket for a company that sold 622,269 vehicles in the US in 2020.

Hatchbacks have always struggled in the US, though they've been a dying breed over the last few years. Ford discontinued the Fiesta and Focus, and VW decided that the US would only get the hotter Golf GTI and Golf R variants. Cars Direct notes that this could be the direction Hyundai takes with the model, offering just the hotter variant, though we won't know if the Veloster is dead until the company goes on the record. 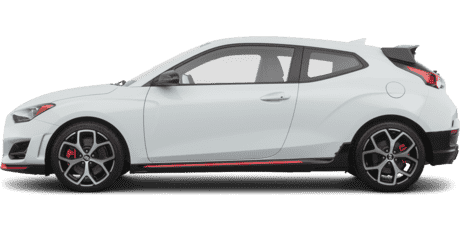