The hot hatch looks nimble on the track.

Sometimes, in-car video at the track can be a bit dull, but that's not the case with this YouTube clip from GreatMotors. The action takes place at Germany's Hockenheimring during an open session, with the video starting once the driver notices another Toyota turning laps ahead of him. According to the video description, the driver "had to go catch up" as often happens during open track events. And you know what? The Yaris actually does it.

More Videos Of The GR Yaris Being Awesome: 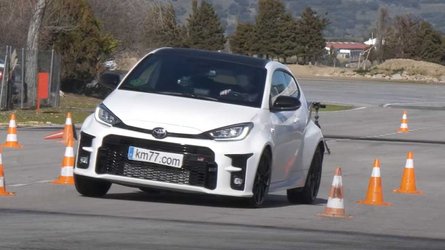 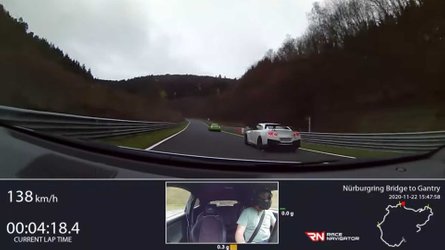 For nine minutes, we bear witness to the ebb and flow between the two Toyotas. The Supra pulls away on straights, but not enough to completely escape the Yaris' gravitational pull at the corners. Lap traffic certainly plays a role, and that works to the hatchback's advantage. But before you write off this matchup due to slower cars, there are several sections where the course is clear and still the GR Yaris hangs in there. Telemetry shows the nimble hatchback pulling 1.3g in corners, and on the long backstretch, the turbocharged three-pot sends it beyond 130 mph. Not bad for a car with half the cylinders found under the Supra's hood.

But wait a minute. How do we know that's a six-cylinder Supra 3.0 in front? The owner of that car posted a congratulatory message in the video comments along with some context from the Supra's point-of-view. Traction was a bit dicey as a light mist was falling, and the driver conceded to still learning proper braking points on the track. To erase all doubts, that person also posted a video of the same day, same session, as seen from the Supra.

So yes, tire choice and driver skill play a role here, not to mention conditions and lap traffic. But that doesn't stifle our desire to have a GR Yaris in the States. For now, we'll have to live vicariously through videos like these.