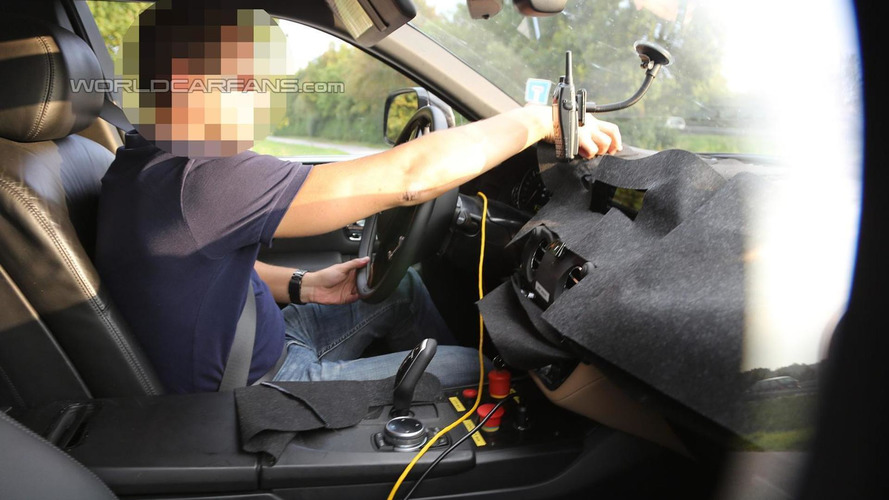 Our spy photographers have managed to take a couple of interior shots with a next-gen Rolls-Royce Phantom test mule.

Our spy photographers have managed to take a couple of interior shots with a next-gen Rolls-Royce Phantom test mule.

On the outside it looks virtually the same as the test mule seen about a month ago in another batch of spy images but now we can take a quick look at the interior. Far from being finalized, the cabin adopts a significantly different dashboard layout compared to the current model as the two central air vents have been moved lower. In addition, these two circular vents appear to be bigger and are no longer flanking the display since this has been moved upwards and has likely grown in size.

The visible buttons and knobs seem to be sourced from the 7-Series upon which the next-gen Rolls-Royce Phantom will likely be based. However, the touchscreen display along with other bits and pieces represent new designs.

Getting back to the exterior, the test mule featured a lowered ride height and two extra air intakes in the front bumper while at the back it had longer quad exhaust pipes. Likely to ride on the "35up" platform, the all-new Phantom could go on an extreme diet taking into account the next-gen 7-Series is bound to lose as much as 200 kg (441 lbs). It will be a more than welcomed weight loss taking into account the current Phantom tips the scales at 2,550 kg (5,622 lbs).

We already know the final design will take an "evolutionary path" with "more charisma and more edge" as described by the firm's design director Giles Taylor while under the hood the V12 will be retained. There are also talks about a plug-in hybrid system but details are scarce at the moment.