Crazy Twin-Engine 1984 Honda CRX Is Unique, Fast, And For Sale

That's one way to stuff eight cylinders into the tiny two-seater.

Here's something you don't see every day, and we aren't just talking about a vintage first-year Honda CRX. The small two-seat runabout was introduced in 1984, packing a 1.5-liter four-cylinder engine good for approximately 75 horsepower. Even for a featherweight machine like the CRX, that's not ground-shaking power so this one-off Frankenstein was created to rectify that in the most complicated, brilliant way possible. And now, you can own it.

This special CRX popped up recently in the Obscure Cars for Sale Facebook group, and this is indeed a very obscure car. The build was commissioned by Car and Driver back in 1984 because let's face it – Americans were still desperately in search of horsepower at that point, and a car with two engines always garners attention. Truth be told, it was actually a rather straightforward process that saw a spare CRX powertrain fill the confines of the space in the rear cargo area. Racing Beat in California did the swap, then redid the swap with larger engines from the Honda Accord because more power is always a good thing.

The end result was the car featured here. It has dual 1.8-liter engines with gear selection handled automatically, and yes, it can be driven on either the front engine, rear engine, or both. When combined, the car generates over 200 horsepower and the current owner claims it can hit 147 mph. Speaking of the owner, after the CRX left Car and Driver's care way back in the day, it bounced around for a while before coming to current owner Joe Dunlap in 1996. Sadly, a fuel leak took the car off the road several years ago, but Dunlap says it's been stored inside and cared for.

Two For One Sale On Engines: 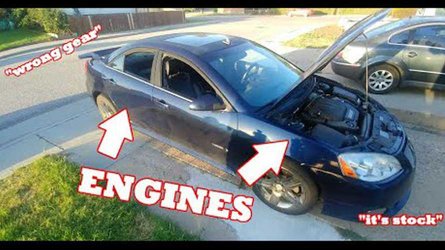 Dual-Engine Pontiac G6 Is Backyard Engineering At Its Best
⠀ 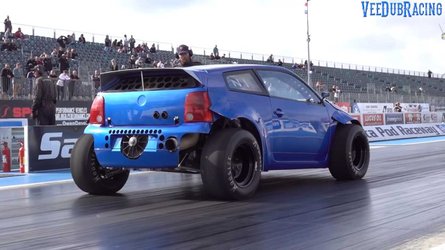 Twin-Engined VW Lupo With 1,800 HP Is The Ultimate Franken-Car

Amazingly, the car has allegedly done 50,000 miles, which seems extraordinary considering the significant customization to the powertrain. It also wears a modest body kit, but looking at it from the outside, you'd never be the wiser that two engines power the plucky Honda. It's a slightly different story inside, where you find a row of extra gauges mounted in the center console.

Dunlap is asking a hefty $20,000 for the car, but it's not like you will find such a machine anywhere else in the world. Furthermore, prices for the classic CRX have been rising and this one also has some legit fame to its credit. Beyond that, simply firing up two engines when leaving Cars & Coffee might be worth the price alone.