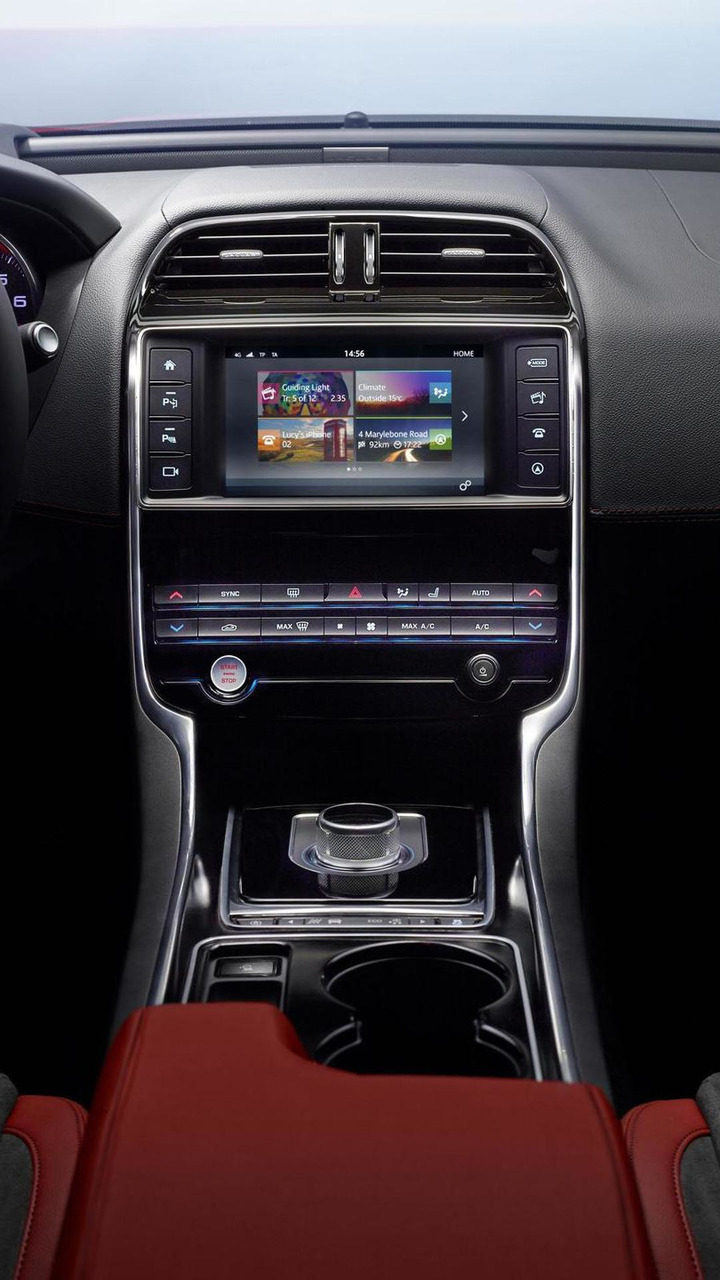 Jaguar's prolonged and odd unveiling of the XE is currently underway but here's our first pictures of the upcoming entry-level sedan.

Jaguar has officially unveiled the 2015 XE, ahead of its debut at the Paris Motor Show.

Set to become one of the most important Jaguars ever launched, the 2015 XE follows in the footsteps of the XF and adopts a stylish exterior that is instantly recognizable as a Jaguar.

The company only released pictures of the XE S but we can see the model will have a sporty front fascia with a prominent grille that is flanked by slender headlights. Moving further back, there's a sculpted hood, a rakish windscreen and chrome side vents. There's also a trunk-mounted spoiler, a dual exhaust system and optional 20-inch alloy wheels.

The cabin appears a little plain but Jaguar says we can expect an assortment of fabrics and leather upholstery. The company also confirmed there will be a choice of gloss black, textured aluminum or contemporary wood trim.

Speaking of the interior, it will come packed with technology including a laser head-up display and a new InControl infotainment system with an eight-inch display. The latter system boasts Bluetooth / USB connectivity, a Wi-Fi hotspot and an assortment of apps. Apple and Android smartphone owners can also connect to the car wirelessly and access a variety of systems including the climate control system and door locks - among other things.

The XE S will be powered by a supercharged 3.0-liter V6 engine that produces 340 PS (250 kW) and 450 Nm (331 lb-ft) of torque. It will be connected to an eight-speed automatic transmission which will enable the car to accelerate from 0-60 mph in 4.9 seconds before hitting an electronically limited top speed of 155 mph (250 km/h).

The XE will also be offered with a variety of 2.0-liter Ingenium four-cylinder petrol and diesel engines. Full specifications will be announced in Paris but Jaguar says the diesel will enable the model to return 75 mpg UK (3.7L / 100km / 62.4 mpg US) with CO2 emissions of 99 g/km.

The car rides on an all-new modular platform that uses aluminum for more than 75 percent of its body structure. The company declined to go into specifics but Jaguar Chief Technical Specialist Mark White said "The XE is as strong and light as it could possibly be thanks to exhaustive analysis and by bringing the latest engineering techniques to bear on its design. It has been challenging to accomplish but the XE's structure is absolutely at the cutting edge of what is achievable today."

Besides utilizing a new platform, Jaguar eschewed the typical MacPherson strut front suspension for a "superior" double wishbone configuration. The company also said a multilink rear suspension couldn't hit their "dynamics targets" so they went with a new Integral Link setup that "delivers the ideal lateral and longitudinal stiffness values needed for the XE's precise handling and supple ride."

Other notable highlights include a new electric power steering system and an All Surface Progress Control system which adjusts the brakes and powertrain to deliver optimum traction in slippery conditions at speeds between 3.6 km/h (2.2 mph) and 30 km/h (18.6 mph). The model will also offer a variety of safety features including traffic sign recognition, reverse traffic detection and an autonomous emergency braking system which automatically brakes the car to prevent or minimize a collision.