You can see the reveal live here at Motor1.com.

It's been 20 years since a new Jeep Grand Wagoneer graced the roadways of America. Technically, there was a one-year Grand Wagoneer offered in 1993, but it was merely a top-trim badge for the smaller Grand Cherokee. The big Grand Wagoneer left the scene in 1991, but it's poised to return for 2022. And now we know when the covers will finally lift on the new production model. Save the date for March 11.

To be more specific, the 2022 Jeep Grand Wagoneer will debut at Noon EST on March 11. Jeep will host a livestream event that we will carry here at Motor1.com, revealing the full-size SUV in both Wagoneer and Grand Wagoneer trim. The above teaser video from Jeep gives us a small taste of the production model from the front, though we don't expect it to differ much at all from the Grand Wagoneer Concept that debuted in September 2020.

Looking closely at this short clip, the grille might be a touch larger. The horizontal LED driving lights from the concept are certainly visible, though the lenses seem a bit larger as well. The side mirrors are clearly larger compared to the concept, but darkness obscures the rest of the SUV. Even with light levels manipulated in Photoshop, we weren't able to discern anything more than what's visible in the video. 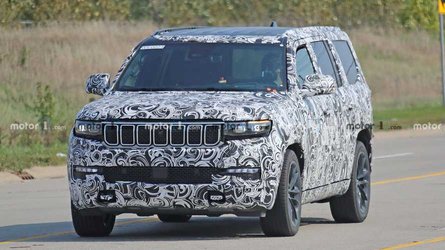 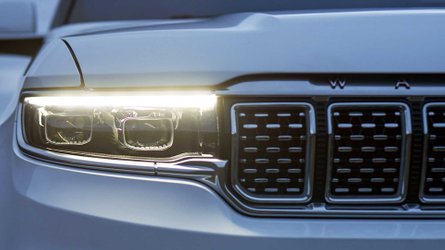 That's okay, because we've had a good look at the Grand Wagoneer Concept inside and out. The fully functional concept previews a very luxurious greenhouse with spacious seats for seven passengers and touchscreens galore. It's not clear how many of those screens will make it to production, and we'll certainly see different layouts between the Wagoneer and range-topping Grand Wagoneer. Underneath, the body-on-frame SUV shares underpinnings with the Ram 1500, making it a true competitor to vehicles like the Ford Expedition, Chevrolet Suburban, and in upscale Grand Wagoneer trim, the Lincoln Navigator and Cadillac Escalade.