Automakers bill off-road vehicles as go-anywhere machines capable of taking you to the furthest reaches of the globe. However, every car has its limits, including some of the best off-road vehicles available, like the Jeep Wrangler. Even it can find itself stuck, which is what happened to one young off-roader in his 2014 two-door model, which got stuck on a slippery, snow-covered hiking trail.

He attempted to get the Jeep unstuck himself, but he had to hike back to the main road and hitchhike down the mountain to find help, enlisting the services of Matt’s Off-Road Recovery, which posted a video of the rescue on its YouTube channel. The video opens with a truck-load of rescuers and a snowcat in tow. Once they pick up the driver, they head to the Wrangler’s location.

The snow wasn’t remarkably deep, covering the bottom portions of the Wrangler’s wheels, but the video does show the ice that’s hiding underneath it, which is the likelier cause of the Jeep’s predicament. The recovery crew quickly lassoed the Wrangler and began tugging it out of the snow with the snowcat, which did take some effort. The Wrangler didn’t bog it down, and it was unstuck in no time. The video shows the snowcat pulling the Wrangler through some deep snow that could have potentially been a problem. 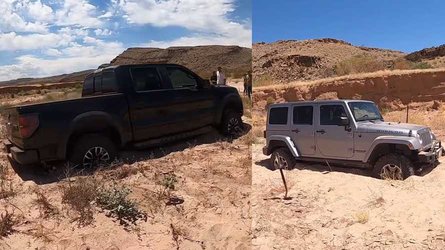 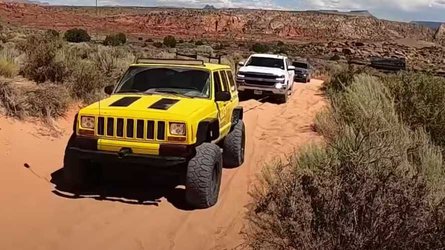 These Seven Cars All Got Stuck In The Same Sand Trap

The crew had the Wrangler recovered in no time. However, once the job was complete, the team reloaded the snowcat, only to find itself in a similar predicament. The snow had been packed down and turned to ice, making it difficult for the Ford Super Duty to find traction. It took the driver several attempts to find enough traction to get itself and the trailer towing the snowcat unstuck. The video is a good reminder that few things can overcome ice-covered roads and trails.