The world of bonkers, not-for-road-use hypercars will get a thorough shaking up on February 22. That's when Gordon Murray Automotive will officially unveil its T.50s track-only missile, and though a new teaser photo doesn't really show much, it hints at the major role airflow and downforce will play in the T.50s universe.

In case you forgot, the road-going version of the T.50 is already off-the-scale awesome. In addition to standard-issue active wings and aero tweaks, the T.50 incorporates a fan to literally suck the car onto the road. The 15.75-inch rear fan spins at 7,000 rpm and with other aero components on the car, can literally double the amount of downforce created under braking. We don't know if any fan changes are coming to the T.50s, but a massive rear wing and a center fin extending rearward from the roof will create over 3,000 pounds (1,361 kilograms) of downforce. Mind you, the street version of the car weighs just 2,174 lbs (986 kg).

The T.50s will be significantly lighter than the street car, and more powerful as well. The three-seater interior is stripped of all but the bare essentials, with the driver sitting in the middle similar to the storied McLaren F1 – a vehicle that Murray was of course heavily involved with. Like the F1, both the T50 and T50s use a V12 for power but at just 4.0 liters and 392 lbs (178 kg) it's allegedly the lightest road-going V12 engine ever built. In the T50s, maximum power is increased to more than 720 horsepower (537 kilowatts) versus 654 hp (488 kW), sent to just the rear wheels through a paddle-shifted six-speed gearbox.

T.50 On Target To Become A Legend: 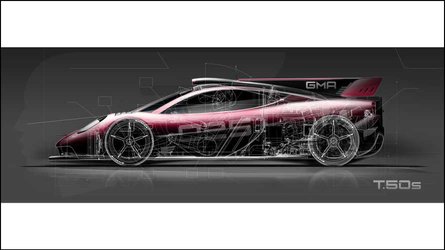 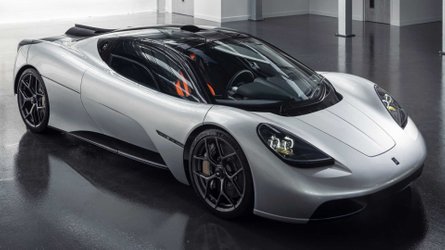 The T.50 is likely the world's last true analog supercar, and the T.50s will be the ultimate interpretation of the concept. It will be as rare and expensive as it is fast, with just 25 units planned at a cost of £3.1 million (approximately $4 million) each. Half are reportedly already spoken for.

Join us at Motor1.com for full details when the T.50s debuts on February 22.