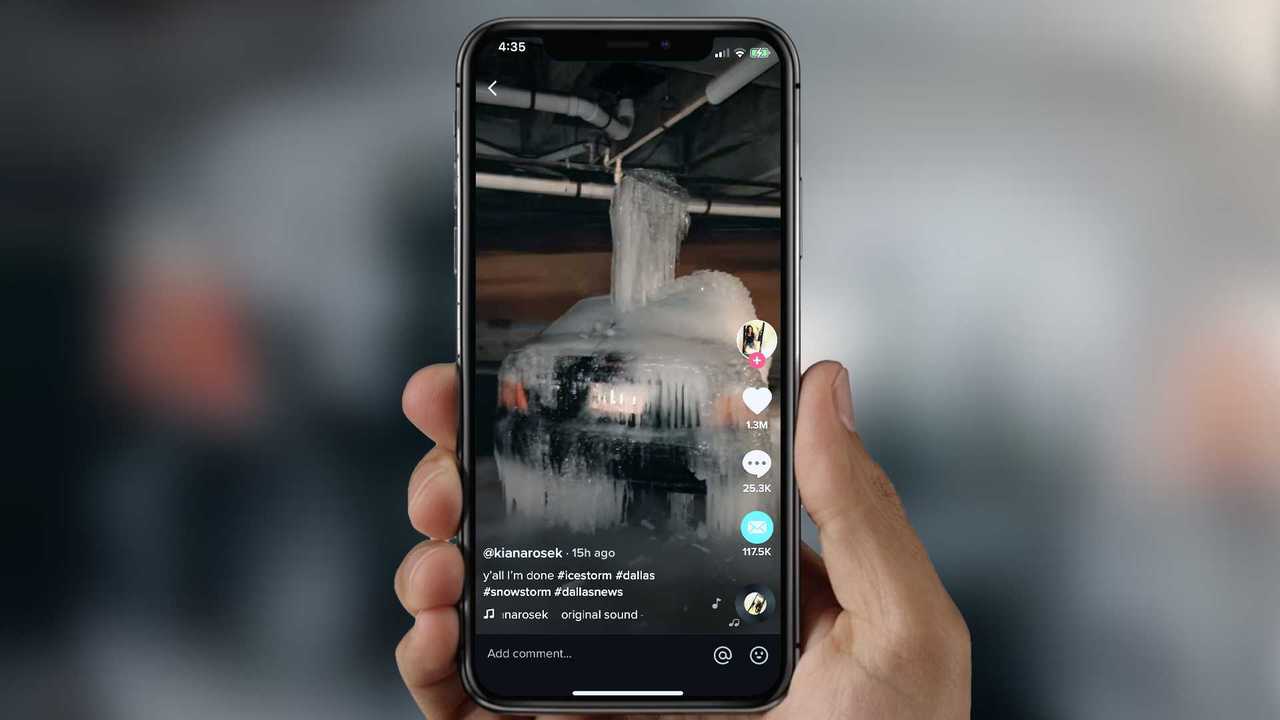 At least it's frozen in a safe place.

Okay friends, it's time for a cheesy cliché. When life gives you lemons, make lemonade. The owner of this very cold-looking sedan didn't get lemons, but she did get more than enough water to make all kinds of lemonade. Unfortunately, it's not in a state of matter where it will do much good, save for granting her a moment of international fame. And to her credit, she seems to be handling the situation with her head held high. We dig that.

First, some backstory and this is serious. Right now, the southern United States is in a bad way with record snowfalls and temperatures well below freezing. This area seldom even gets close to freezing, and though the worst is hopefully over, chilly nights will stretch through the weekend. Unfortunately, the cold and snow caused massive power outages throughout Texas and rolling blackouts through the entire plains, reaching all the way to the Dakotas. Hundreds of thousands in the state are still without power.

We also know that few people in the entire world are as hardened, resourceful, and caring as our friends in the south, and we know they'll come back from this stronger and better. Just don't walk down the middle of a snow-covered highway, okay folks?

Speaking of hardened, we have what looks like a late first-generation Ford Focus sedan. The abundance of ice makes it difficult to confirm that, but as you can see in the above TikTok video, it happened to be parked in the wrong place at the wrong time. The owner is a Twitter user named Kiana Rose, and with images of this icy tragedy going viral, she took to social media to state that yes, it's her car and yes, of all the other places in this multi-story car park in Dallas, hers apparently was the only spot to spring a leak.

It's unclear if there's any damage to the car. As long as the windows and doors were shut tight, presumably there's no water inside so that's a good thing. However, that much ice certainly isn't light, so it's hard to say what kind of body damage might be present underneath. The back window also looks to be the epicenter for the busted pipe, and if it cracked at some point, this could be game over for the frigid Focus.

Winter's Worst Brings Out The Best:

As we said, this Texan seems to at least have a sense of humor about the whole thing. In a second TikTok video (below) she acknowledges the parking garage has seven floors, and yet the water pipe gods saw fit to smite only her Focus with an icy tomb. Word of warning, she drops a few F-bombs (okay, more than a few) in the video. But come on, wouldn't you have some choice words if Elsa singled out your car in a massive parking garage for a Frozen magic attack? F--- yes you would.

Kiana, you're the world's new hero. You stand for those unlucky few who get hit in the head with a foul ball in a stadium of 50,000 people. You stand for those at a crowded beach who suddenly feel the unmistakable spatter of bird poop on their neck. You stand for Casey Wagner, another unfortunate Texan who was struck by lightning twice a few years ago. Warmer weather is coming, and ice melts. Keep standing tall.