Third generation Honda Pilot spied inside and out 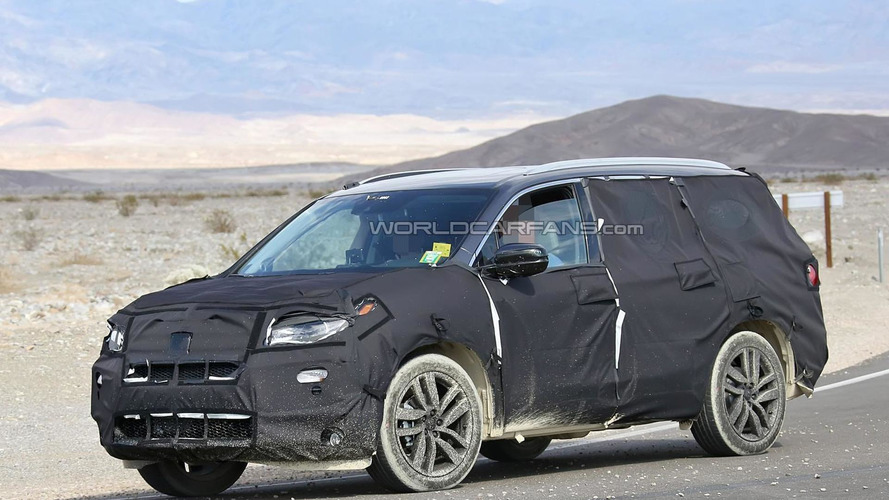 The all-new Honda Pilot has been spied for the first time while undergoing testing in the deserts of California.

The all-new Honda Pilot has been spied for the first time while undergoing testing in the deserts of California.

Now in its second generation, Honda's Pilot mid-size crossover looks bland even though it received a facelift for the 2012 model year. Hopefully that will all change with the third generation grabbed on camera for the first time by our spy photographers. The prototypes spotted in the deserts of California were wearing extensive camouflage which could indicate a significant makeover is in the works although the overall shape of the car will remain just about the same.

The front fascia appears to be more expressive and will feature a redesigned grille while the headlights come with new graphics and boast some LED elements. Moreover, the front bumper has also gone through surgery and houses massive turn signals as well as the fog lamps which have been placed low. The back was heavily camouflaged but we can already see the taillights are very different from those fitted onto the current Pilot facelift.

Moving inside the cabin, gone are the round air vents as Honda has decided to use a vertical arrangement and the central ones are flanking a generous touchscreen display. Another major change is the gear selector repositioned from the dashboard to the center tunnel for a more conventional layout.

According to our sources, the overhauled Honda Pilot will come with a direct-injection V6 3.5-liter engine benefiting from the latest Earth Dreams technology. Output is expected to significantly rise from today's 250 bhp (186 kW) to approximately 310 bhp (231 kW). It is believed front-wheel drive versions will feature a CVT whereas AWD models will be equipped with a six-speed manual gearbox.

The third generation Honda Pilot will reportedly be introduced next spring and should go on sale a few months later as a 2016MY.

Gallery: Third generation Honda Pilot spied inside and out