Audi gets in on the electric fun with a slightly lower price tag than its Porsche counterpart.

When it comes to innovation, we should know better than to question Audi. The German brand, renowned for its pioneering Quattro all-wheel-drive system, a bizarre obsession with turbocharged five-cylinder engines, and the ones responsible for the broader industry's fascination with LED running lights, Audi is now setting out in a new direction: all-electric, high-performance motoring.

This is far from Audi's first foray into the world of zero-emissions vehicles. There were a spate of R8-based EVs, and of course, there's the E-Tron and E-Tron Sportback, but its newest offering is cause for the most excitement: the 2022 Audi E-Tron GT and RS E-Tron GT. Cousins of the Porsche Taycan, the E-Tron GT and its RS counterpart mark a new take on the performance EVs from one of the industry's most innovative companies.

If you've read our deep dive of the Porsche Taycan, the E-Tron GT will sound pretty similar. There's a 93.4-kilowatt-hour lithium-ion battery pack, an 800-volt electrical architecture that allows rapid recharging – five to 80 percent capacity in 23 minutes – an electric motor on each axle, and a rear-mounted two-speed automatic. Base models pack 469 horsepower (350 kilowatts) and 464 pound-feet (630 Newton-meters) while the RS variant thunders silently down the road with 590 hp (440 kW) and 612 lb-ft (830 Nm). Like the E-Tron crossover, the GT has an overboost function that temporarily increases output to 522 and 637 hp, respectively.

Go with the standard E-Tron GT, which comes in two trims, and 60 miles per hour arrives in 3.9 seconds while carrying on to 152 mph – the RS model does the deed in (a possibly conservative) 3.1 and will reach 155 mph. Critics will be quick to point out that the E-Tron GT is slower to 60 than every version of the Porsche Taycan, aside from the new rear-drive, single-motor model.

If you've read our deep dive of the Porsche Taycan, the E-Tron GT will sound pretty similar.

The 4S hits 60 in 3.8 seconds, the Turbo does it in 3.0, and the Turbo S promises 2.6 seconds to 60. And on the Tesla side of the ball, the RS matches the Model S Long Range's 3.1-second sprint, but nothing at Audi (or Porsche, for that matter) can match the claimed sub-2.0-second sprint of the new Model S Plaid.

Tesla stans will similarly criticize the E-Tron GT's promised range. EPA estimates aren't available yet, but Audi predicts the standard models will cover 238 miles per charge, while the RS should net 232. That said, if Porsche is any indication, these estimates may be dramatically lower than the real-world range. The Taycan 4S, after all, has a history of covering far more than its 227-mile EPA estimate.

Like the Taycan, an air suspension underpins the E-Tron GT, which Audi claims has 60 percent more capacity than the setup found in the E-Tron crossover and E-Tron Sportback. Drivers can adjust the ride height over a span of 1.7 inches (0.9 down and 0.8 up). Four-wheel steering is available on the E-Tron GT and is standard on the RS, although we'd struggle to order a car without the impressive arrangement – if Audi's other products are any indication, E-Trons with four-wheel steering will be far better to drive, offering greater agility and better high-speed stability.

Compensating For The Exterior Inside

Audi's interior design has been good for literal decades, but the past few years have seen a big transition from the brand, with twin touchscreen displays in the center stack and all-digital instrument clusters joining the high-quality materials and eye-pleasing shapes. The E-Tron GT flips the script, though, canting the 12.3-inch touchscreen display toward the driver and replacing the lower 8.6-inch touchscreen with a smaller unit and physical buttons to manage the climate controls.

We don't have images of the standard E-Tron GT's interior yet, but the RS features the usual sporty accoutrements: aggressive sport seats, ample amounts of carbon-fiber trim, red stitching, and an Alcantara-wrapped flat-bottom steering wheel. A leather-free interior is standard on all models, although if you really need your zero-emission car's cabin draped in the hide of methane-producing bovines, Audi will accommodate you.

On the actual, functional design front, the start button and gear selector sit on the center console rather than the dash, like on the E-Tron's Porsche-badged cousin, while the overall cabin layout feels far more conventional than the screen-intensive Taycan. Much of the switchgear is familiar from other Audi products, which is a good thing. Expect well-damped, high-quality controls.

Audi struggled to get away from the Porsche looks on the exterior, though. Dramatic (and arguably more attractive) designs, true to the concept cars, sit at either end of the E-Tron GT. But in the middle is a profile view that smacks of Stuttgart's take on the electric sedan. This isn't necessarily a bad thing, as the side view is one of the Taycan's best, but it's still disappointing for fans eager for a 100-percent Audi take on the electric sedan. Speaking of that design, it rides atop standard 20-inch wheels – RS models are available with 21s. Also optional are Matrix-LED headlights. 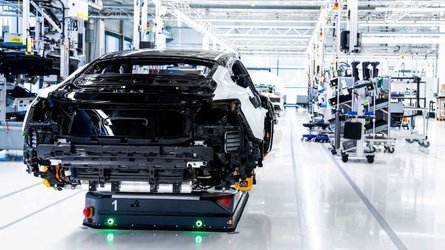 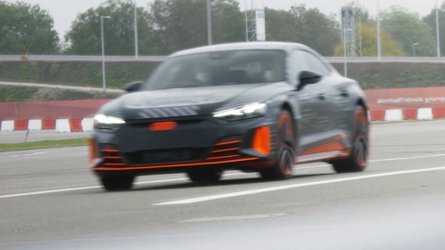 Prices for the E-Tron GT start at $99,900 for the base Premium Plus, $107,100 for the Prestige, and $139,900 for the RS (not including a $7,500 federal income-tax credit, which Audi still qualifies for). Those prices seem high, but there's reason to believe the E-Tron will represent a value relative to its Porsche counterpart – that's because Audi's options catalog is dramatically smaller than Porsches, relying on fixed trim levels and a smattering of options packages to the all-you-can-eat folks in Stuttgart.

Audi is expecting the E-Tron GT and RS E-Tron GT to arrive in North American dealers this summer, but we'll have additional pricing info and official range estimates in the coming weeks and months. Stay tuned for more on Audi's latest all-electric.