This is how you test a car before its launch.

A few days ago, we shared the first spy photos with the facelifted Ford Focus. It's the new Focus that’s not available in the United States and it was snapped in Active wagon form. Today, we have new photos with the refreshed model, and this time they are showing a hatchback model testing in heavy winter conditions.

Judging by the black plastic cladding on the wheel arches, this seems to be an Active model again. This means, although it is a hatchback, it’s slightly lifted compared to the regular model. The wheels design and the roof rails are also a giveaway this is most likely the rugged crossover-inspired variant of the Focus.

Other than that, it looks very similar to the test car from earlier this week. This includes the camouflaged front fascia, where most of the changes will be focused. These new photos provide a better look at the redesigned headlights and their lighting signature.

The rear end is somewhat obscured by the huge amounts of snow and it’s difficult to say if there are any major changes there. The previous prototype hinted at new taillights though, and their slimmer shape is partly visible in these distant photos as well.

Getting Ready For A Mid-Cycle Refresh: 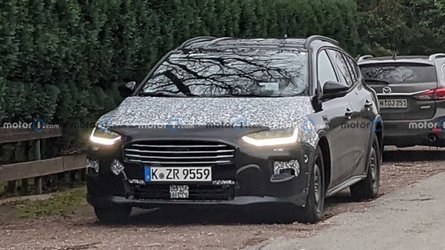 Some of the new shots provide a partial view of the cabin, where we expect big changes. If the Chinese-spec Focus, which was recently facelifted, is anything to go by, there should be a wider screen for the infotainment system and rearranged buttons for the HVAC system.

According to early reports, we are approximately 12 months away from seeing the facelifted Focus. Again, it won’t be sold in the United States and the version depicted in the gallery above is most likely for the European market.