Sibling rivalry at its best.

Other than the different body styles, the Audi RS6 Avant and RS7 Sportback are virtually identical. The super wagon and liftback weigh about the same and share the twin-turbo 4.0-liter V8 with a monstrous 600 horsepower and 800 Newton-meters (590 pound-feet) of torque. The same goes for the Quattro AWD system and the eight-speed automatic transmission with launch control. Ok, then why bother lining up the two Audi Sport models for a drag race?

To our surprise, the drag race organized by Carwow on a soaking wet runway had somewhat of an interesting twist after the start. While the RS6 Avant managed to pull ahead better thanks to the driver’s quicker reaction, the RS7 then started to recover the lost ground, and the drag race ended in a photo finish. Both crossed the finish line in 12.6 seconds, with the super wagon being a smidge quicker.

Whether it was due to different gearbox software, the Sportback’s sleeker body and/or the tires, the RS7 was ultimately just as quick as its long-roof sibling despite the poor start. The high-powered liftback also impressed in the first rolling race from 50 mph (80 km/h) as the transmission’s response was significantly quicker, allowing the RS7 to comfortably take the lead.

Drag Race All The Audis: 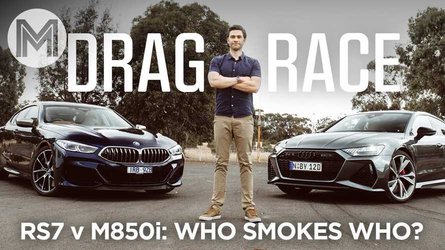 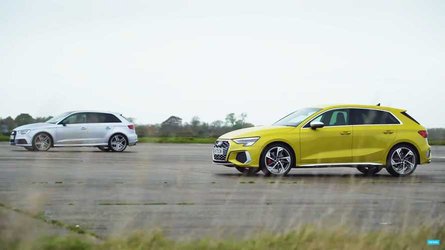 The rolling race was repeated, only this time around both cars had all the sportiest settings activated along with manual shifting. It was the reverse situation as the RS7 botched one of the gear changes, enough for the RS6 to win the duel. In the search for the best two out of three, there were no issues with either of the two cars/drivers in the final rolling race, which was neck and neck from start to finish.

The RS comparison ended with a brake test from 70 mph (113 km/h) in which the two Audi Sport models were once again pretty much inseparable. After all, they both have the same brakes and weigh nearly the same, with the RS7 having to carry around an extra 10 kilograms (22 pounds). Such a negligible difference can be offset by the driver’s weight.

At the end of the day, we’d go with the greater practicality of the Avant rather than the Sportback’s sleeker design. The wagon is also $5,000 cheaper than the liftback in the United States, thus making it easier for us to pick our favorite.