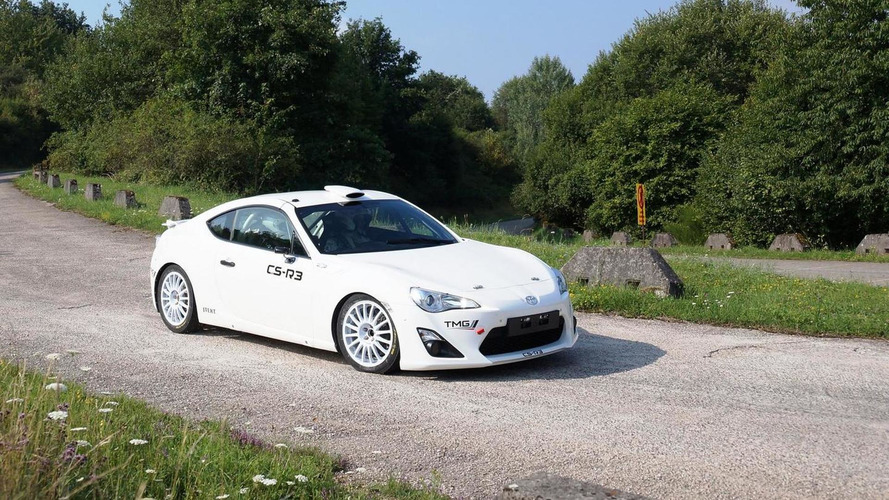 Toyota has introduced today the GT 86 CS-R3 rally car which will be seen in action next month during the ADAC Rallye Deutschland.

Toyota has introduced today the GT 86 CS-R3 rally car which will be seen in action next month during the ADAC Rallye Deutschland.

An evolution of the road-going car, the track-only derivative was developed by Toyota Motorsport GmbH (TMG) to meet FIA R3 class requirements. Output of the horizontally-opposed four-cylinder 2.0-liter boxer engine was bumped from 197 bhp (147 kW) to 240-250 bhp (179-186 kW) by modifying the engine's software and tweaking the cam-lift and compression ratio.

Power is channeled to the rear wheels through a sequential 6-speed transmission and a limited-slip differential with variable ramp settings. It adopts a HJS racing exhaust and exhaust manifold, MacPherson front & double wishbone rear suspension and sits on OZ 17-inch (for tarmac) and 15-inch (for gravel) wheels while inside there's a FIA-homologated lightweight R3 safety cage. The road-legal Toyota GT 86 has a curb weight of 1,275 kg (2,811 lbs) but the CS-R3 version has a minimum regulated weight of 1,080 kg (2,381 lbs).

It will be seen in action for the first time in August during the ninth round of the FIA World Rally Championship where it will act as the official "pathfinder" car and will be driven through all stages of the ADAC Rallye Deutschland.

Toyota says customer deliveries of the GT86 CS-R3 will begin in the first quarter of 2015 at a starting price similar to other R3 cars.