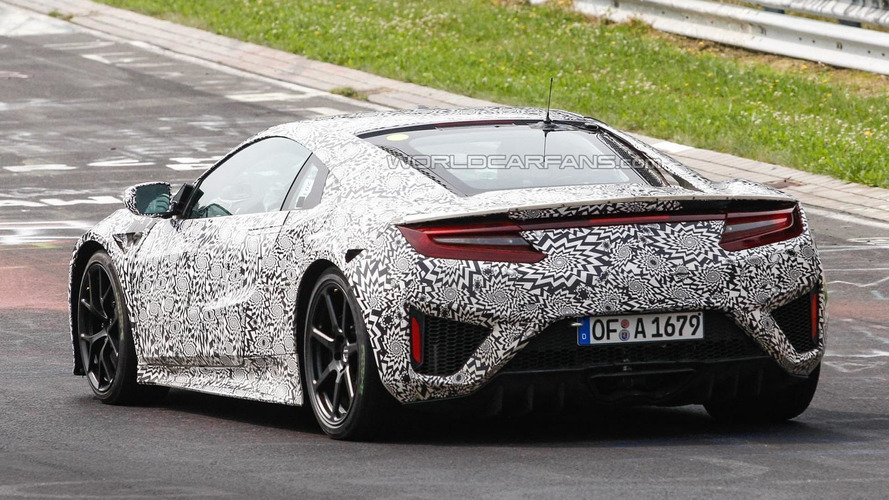 The highly anticipated 2015 Honda/Acura NSX has been spied undergoing final testing in Germany around the Nürburgring circuit.

The highly anticipated 2015 Honda/Acura NSX has been spied undergoing final testing in Germany around the Nürburgring circuit.

Honda has been relatively quiet lately about the long-awaited NSX revival but now we have a fresh batch of spy photos with a camouflaged prototype testing at the 'Ring, ahead of a full reveal likely to occur before the end of the year since the company has already announced plans to begin production in 2015 at a newly established Performance Manufacturing Center in Ohio where they are investing 70M USD. As a reminder, the 2015 NSX is being developed by Honda R&D Americas in Raymond, Ohio.

The car appears to look virtually the same as the Acura NSX concept shown at last year's NAIAS in Detroit which itself was a minor revision of a concept exhibited a year earlier at the same venue. It will make use of a three-motor high-performance hybrid system encompassing two electric motors driving the front wheels along with a third motor built into an all-new dual-clutch transmission while a mid-mounted V6 engine will power the rear axle.

Honda has labeled this system as Sport Hybrid Super Handling All Wheel Drive (SH-AWD) and they say it will be capable to provide the NSX reboot with "instant delivery of negative or positive torque to the front wheels during cornering to achieve a new level of driving performance unparalleled by current AWD systems."