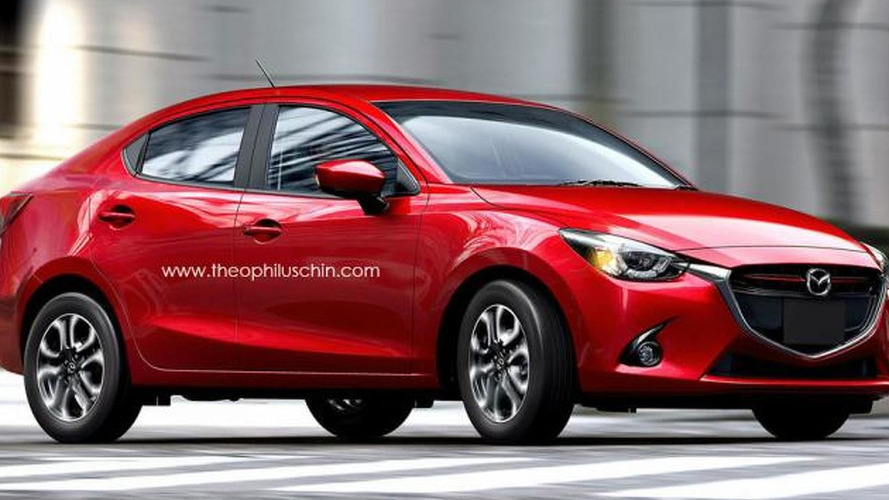 Theophilus Chin has envisioned the recently introduced 2015 Mazda2 (Demio in Japan) as a sedan.

Theophilus Chin has envisioned the recently introduced 2015 Mazda2 (Demio in Japan) as a sedan.

The new generation Mazda2 looks very appealing in the standard five-door hatchback body style and the attractive styling will eventually rub off on the sedan variant which has already been confirmed by the Japanese marque. Seen here is Theophilus Chin's interpretation of the model which paints a pretty accurate picture of the subcompact sedan likely to be introduced sometime next year.

The engine lineup will be carried over from the hatchback so expect the newly developed SKYACTIV-D 1.5-liter rated at 105 PS (77 kW) and 250 Nm (184 lb-ft) of torque along with a SKYACTIV-G 1.5-liter in various states of output. These engines will send their power to the front wheels via both manual and automatic gearboxes and corroborated with SKYACTIV technologies will make the Mazda2 one of the most fuel efficient and cleanest models in the segment.

Mazda hasn't specified the 2's dimensions but the Hazumi concept was 4070mm long so the sedan will be slightly longer at the back to accommodate a larger trunk while the simple yet stylish interior cabin will be carried over from the hatchback and should be quite spacious if the Hazumi's 2585mm wheelbase will remain intact.

On a related note, Mazda2's platform will extend beyond the hatchback and sedan body styles as a CX-3 small crossover is also in the works. The company's officials have ruled out the possibility of a three-door version, just like Renault did with the fourth-gen Clio.