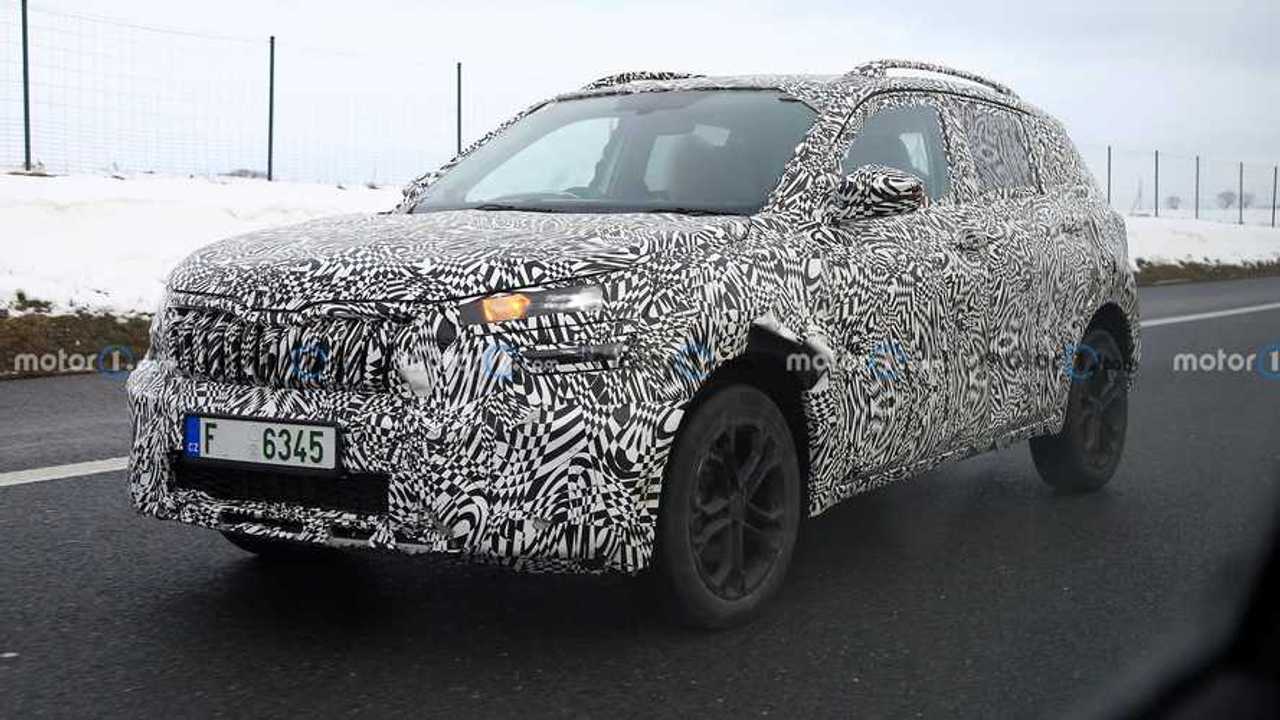 Meanwhile, Skoda has released its very own "spy shots."

China with its Kamiq GT and Kodiaq GT is not the only country to get bespoke Skoda models as India will soon have its very own vehicle – the Kushaq. Named after “Kushak” (meaning “king” or “emperor” in the ancient Indian language of Sanskrit), the small crossover has been caught thousands of miles away as our spies stumbled upon a near-production prototype somewhere in Europe.

Even though it’s all covered up, we can easily see the Kushaq follows the headlight layout used by Skoda for the global Kamiq, Karoq, and Kodiaq crossovers by featuring the same split layout. The higher-end versions will come with LED lights at the front and also at the rear where it appears to have Scala-like taillights. Hiding underneath the camouflage is a design that shouldn’t stray away too far from the Vision IN concept (pictured at the bottom) unveiled nearly a year ago.

The camouflage does a good job at masking the exterior design, and Skoda has released its own set of “spy shots” with prototypes covered in a more attractive red camo. We’re being promised a “rugged look” and big wheels to make the Kushaq seem larger than it actually is. The Czech brand isn’t revealing the vehicle’s size, but we do know it has a 2,651 mm (104.3 inches) wheelbase. As a reminder, the Vision IN concept was 4,256 mm (167.6 inches) long, and we’re expecting the production version to have a similar footprint.

It will ride on an India-specific version of the MQB A0, a platform that has also underpinned the Kamiq subcompact crossover sold internationally. Power will be provided by familiar three-cylinder 1.0 TSI and four-cylinder 1.5 TSI gasoline engines connected to a six-speed manual, a six-speed automatic, or a seven-speed DSG, depending on the trim level. The Kushaq will be sold exclusively with a front-wheel-drive layout to keep the costs low.

Skoda India mentions the new crossover can be fitted with up to six airbags and hill hold control, along with electronic stability control and rain-sensing wipers. Other goodies planned for the Kushaq include automatic headlights, tire pressure monitoring system, auto climate control, tablet-style infotainment system, and cruise control.

The full reveal is scheduled to take place in March and then the Kushaq will have to face stiff competition coming from the Nissan Magnite, Hyundai Creta, Kia Seltos, and the Volkswagen Taigun.