This may be just an early mule but there's a lot to be seen.

In June last year, Volkswagen and Ford shared more details about the cooperation the two companies announced earlier in 2020. Their plans include a number of jointly developed models and what you see in the gallery below could be the first actual fruit of their partnership.

Our photographers sent us a batch of shots showing an early mule of the next-generation Ford Transit Custom and its passenger Tourneo Custom variant. Judging by its look, you may think this is just a facelift for the existing model but the fact that this test car has six lugnuts is a big hint about the new underpinnings it most likely hides. The current generation Transit Custom has a five-bolt layout and even the larger Transit has five lug nuts.

What else do we see? Not much honestly, but those little white dots are probably rivets holding fake body panels attached to the front wheel arches, hood, and bumper. Also, while the front fascia looks quite similar to the one seen on the model that’s still on sale, the headlights appear to be slimmer and slightly narrower.

At a glance, the dimensions of this test vehicle look unchanged compared to the current Transit Custom but there’s extensive room in the wheelhouse which may suggest there could be tweaks to the wheelbase. There’s also a second test prototype next to this black bus and it appears to be the cargo model.

VW And Ford Building Vans Together:

From what we know so far, the new Transit Custom will be used as a foundation for the next-generation Volkswagen Transporter. Before you say the new T7 is already under development - yes, this is true, but it will be available only as a passenger vehicle. The cargo model will be a rebadged and slightly modified version of the new Transit Custom. In turn, Volkswagen will share its new Caddy with Ford, which will sell it as the Transit Connect. The two smaller vans will be assembled by Volkswagen in Poland. 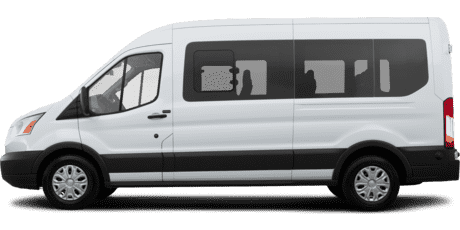 save over $3,400 on average off MSRP* on a new Ford Transit Passenger Wagon