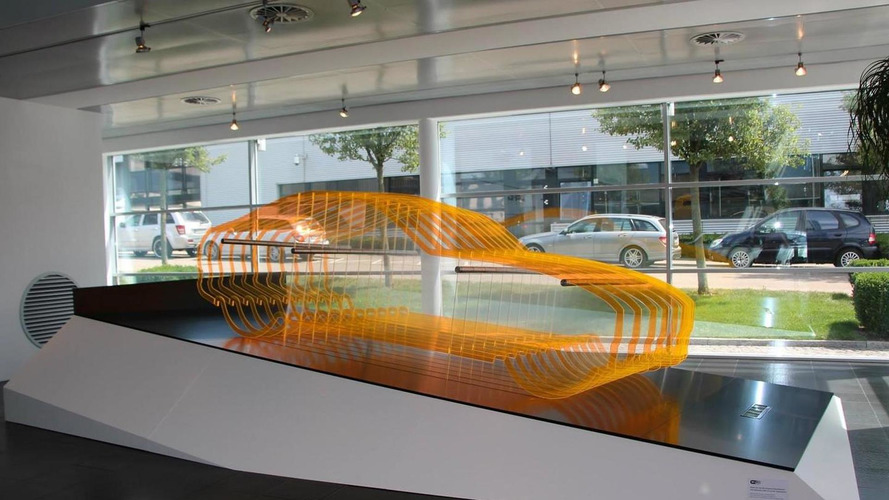 AMG's showroom in Affalterbach near Stuttgart is currently showcasing a full-size teaser of the highly anticipated AMG GT.

AMG's showroom in Affalterbach near Stuttgart is currently showcasing a full-size teaser of the highly anticipated AMG GT.

Mercedes-Benz and AMG have thought of an ingenious way to tease the upcoming AMG GT which is set to receive a full reveal in October at the Paris Motor Show but we will have revealing images in September. It's set to go on sale in March 2015 and at first will be available only in GT-S guise equipped with a 4.0-liter V8 twin-turbo engine rated at 510 PS (375 kW) and 479 lb-ft (650 Nm).

Later during the car's lifespan, a lesser GT variant will be launched with the same engine but detuned to 462 PS (340 kW). The S will sit on 19-inch front / 20-inch rear alloy wheels and will also pack an E-diff whereas the standard mode will feature 19-inch alloys along with a limited-slip differential.

AMG boss Tobias Moers previously hinted the AMG GT-S will need less than 3.9 seconds to complete the 0-62 mph (0-100 km/h) before topping out at 194 mph (312 km/h). Don't consider this as a replacement for the SLS AMG because it's not since the AMG GT is smaller and more affordable than the outgoing SLS and it also lacks the gullwing doors.

Mercedes and AMG have already revealed the car's interior cabin and the engine's soundtrack so now we are waiting for that green camouflage to come off to see if the AMG GT will indeed be "the most beautiful Mercedes ever" as described by Mercedes-Benz design chief Gorden Wagener.