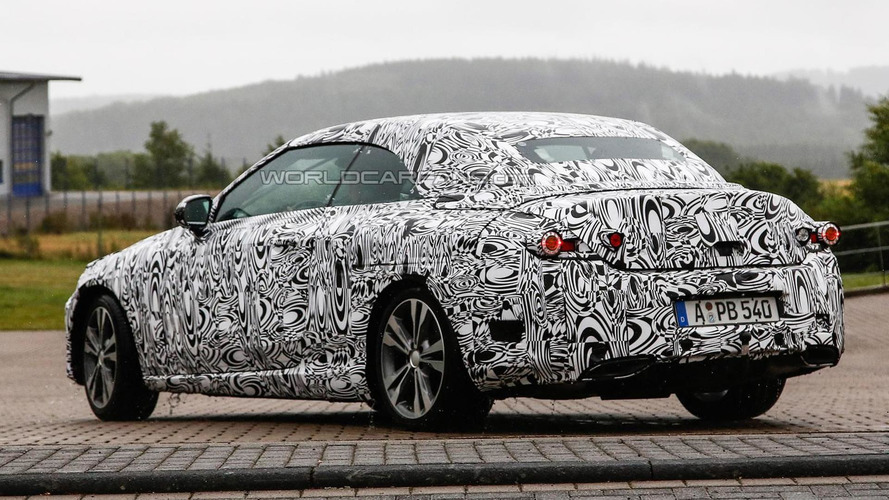 A prototype of the 2016 Mercedes-Benz C-Class Cabriolet has been spied undergoing testing on a wet day.

A prototype of the 2016 Mercedes-Benz C-Class Cabriolet has been spied undergoing testing on a wet day.

Mercedes-Benz recently unveiled the C-Class Estate so now they are putting the finishing touches on other derivatives set to arrive next year. The first of the bunch will be a coupe variant which will be followed by this, a C-Class Cabriolet. Although at first Mercedes-Benz were thinking about installing a metal roof, the model will adopt a multi-layered soft top with a design closely echoing the one on the larger E-Class Cabriolet.

Engine lineup will be taken over from the other body styles and will be topped by a C63 AMG variant powered by a newly developed twin-turbo V8 engine. A 4MATIC all-wheel drive arrangement will likely be offered as well along with the AIRSCARF neck-level heating and AIRCAP air-deflection systems.

An official launch of the four-seater open-top C-Class will likely occur in September 2015 at the Frankfurt Motor Show, with sales to commence before the end of that year or in 2016. Chances are it will end up being more affordable than the SLK which will make it the cheapest Mercedes-Benz convertible.