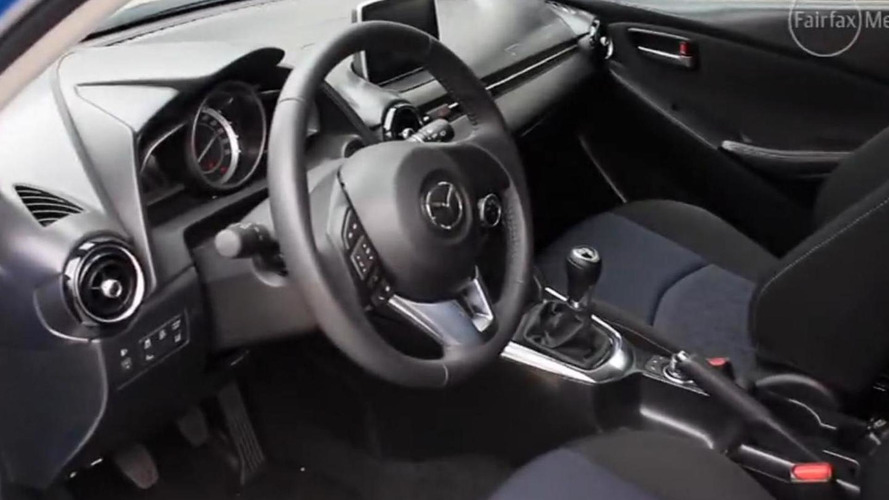 Mazda has indirectly revealed the interior cabin of the all-new "2" set to be unveiled in the months to come.

Mazda has indirectly revealed the interior cabin of the all-new "2" set to be unveiled in the months to come.

Our colleagues from Drive.com.au had the opportunity to shortly test drive a prototype of the next generation Mazda2 at the company's Mine Proving Ground in Nagao, Japan. While the exterior was wrapped around in a full body camouflage to disguise the Kodo design, surprisingly Mazda didn't bother hiding the interior cabin which gives us the chance to analyze it.

As expected, the layout is simple with very few buttons and knobs as Mazda went for an uncluttered design as seen in the "3" and "6". As a matter of fact, it's actually more simplified compared to its larger brothers and interestingly there's only one center air vent. A free-standing touchscreen display has replaced most controls and there are many metallic accents providing a more premium feel along with a leather-wrapped three-spoke steering wheel taken from the 3. As a reminder, this was a prototype so the production-ready model could look slightly different.

Compared to the outgoing model, the new Mazda2 is 160mm longer (at 4060mm), 25mm taller (at 1500mm) while width has remained the same at 1695mm. There's a more spacious cabin as a result of stretching the wheelbase by 80mm to 2570mm, providing more room especially in the front where the driver and passenger benefit from more headroom and shoulder room.

The prototype tested was a European version equipped with a 1.5-liter 4-cylinder gasoline engine generating 75 PS (55 kW) and 135 Nm (100 lb-ft) sending power to the front wheels through a 6-speed manual transmission. The engine will also be available in a higher state of tune (at least in Australia) with 107 PS (79 kW). A more economical 1.5-liter diesel with 105 PS (77 kW) and 250 Nm (184 lb-ft) will be offered as well along with a 4-cylinder 1.3-liter gasoline motor – all kitted with SKYACTIV tech.

The all-new Mazda2 will come out in the next few months so look for a public debut in October at the Paris Motor Show.