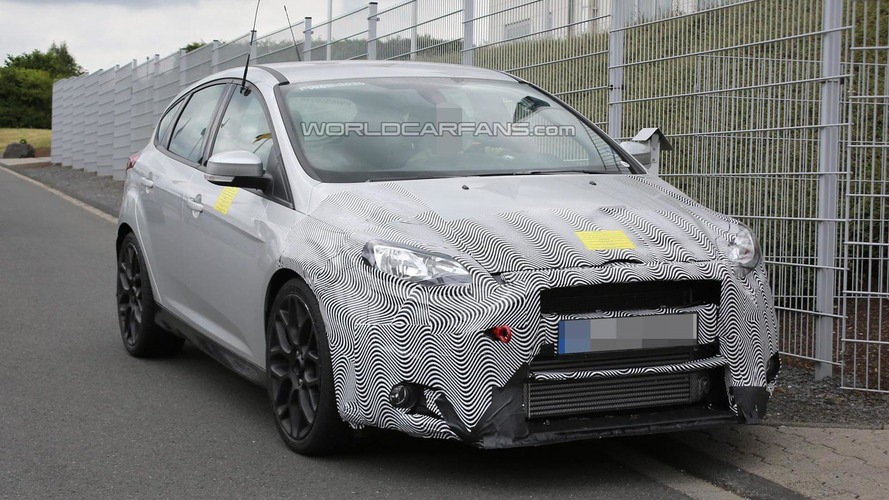 A chassis testing mule of the 2016 Ford Focus RS has been caught on camera in Germany by our spy photographers.

A chassis testing mule of the 2016 Ford Focus RS has been caught on camera in Germany by our spy photographers.

The last hurrah for the current generation Focus will represent a range-topping RS version set to come out sometime in 2016, a year before the all-new model is scheduled to hit showrooms. Likely to retain a front-wheel drive layout, the RS variant is believed to feature a tweaked Revoknuckle front suspension (Ford's version of the MacPherson strut) together with an electronic differential to better cope with all that power sent to the front axle which could cause torque steer problems.

Motivation is expected to come from the 2.3-liter 4-cylinder EcoBoost engine found in the new Mustang where it develops more than 305 bhp (227 kW) and 406 Nm (300 lb-ft) of torque. In the Focus RS, the engine could be further tweaked to unleash 350 bhp (261 kW) although this hasn't been confirmed yet.

The car spotted here was only a chassis testing mule wearing the body of the Focus ST with a lower sports suspension, front lip spoiler and larger air intakes. It also had a different exhaust pipe arrangement together with a modified roof-mounted spoiler.

Since we mentioned the 247 bhp Focus ST, we remind you the facelifted version will be introduced tomorrow at the Goodwood Festival of Speed. The RS version will probably follow in the second half of next year as a 2016MY.