Buick will officially debut the Enclave in the spring.

The Buick Enclave is Buick's flagship model, and some changes are coming for the 2022 model year. Those changes – on the outside anyway – were officially revealed today in what Buick is calling a first look at its upscale SUV.

Only two images were offered, showing the Enclave in three-quarter views from the front and the rear. With this technically being a teaser, Buick didn't provide details on exactly what's different but we clearly see a much larger grille that's quite reminiscent of the Cadillac XT5. Buick's trademark chrome strip now reaches beyond the grille, underlining new headlights that are considerably thinner. Further down, the lower fascia is squared off with large lamps at each corner. Given the extremely thin lenses above, these could be the Enclaves primary headlights with the top-mounted units being LED running lights.

We don't spot any appreciable changes to the Enclave's profile, but updated taillights are visible at the back. The prominent chrome strip spanning the rear hatch is gone, but this could be a special edition devoid of such trim. The base of the rear fascia looks slightly different as well, notably with how the exhaust finishers are incorporated into the design.

The Latest News From Buick:

Neither photo gives us a hint of interior changes, but we expect to see some significant changes inside. A prototype sighting back in late 2019 had the dash completely covered, and lest we forget, automakers are currently engaged in a bigger-is-better infotainment war. A revamped dash with a larger screen is almost a certainty, and we wouldn't be surprised to see GM's Super Cruise migrate to Buick's flagship. 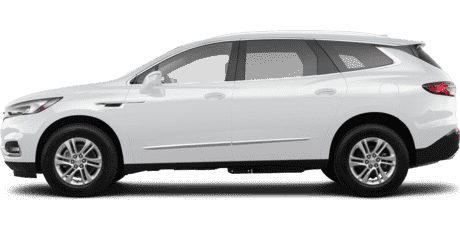 save over $3,400 on average off MSRP* on a new Buick Enclave

It's a bit strange for automakers to tease a refresh by releasing complete images of vehicles ahead of an official debut, especially when that debut isn't imminent. Buick's current plan is to reveal the updated Enclave in its entirety sometime in the spring of 2021.