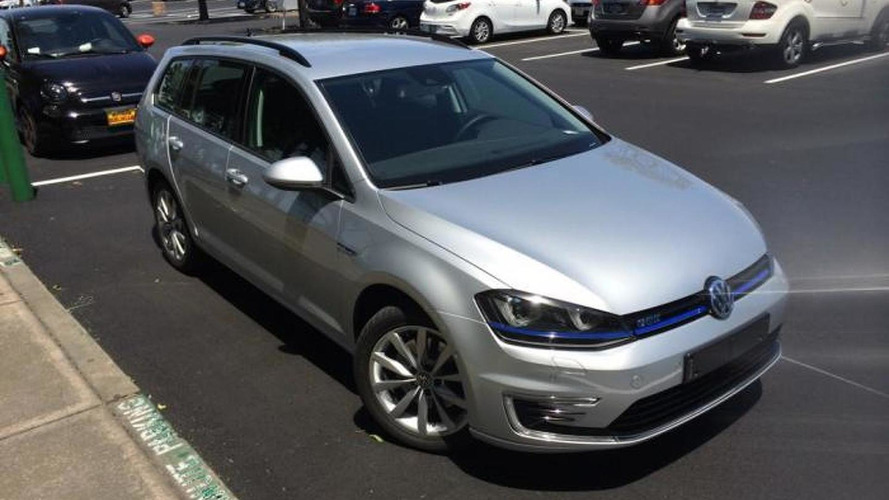 A prototype of the Volkswagen Golf GTE Variant has been photographed in United States near the San Francisco airport.

A prototype of the Volkswagen Golf GTE Variant has been photographed in United States near the San Francisco airport.

Volkswagen has big plans to expand the Golf VII Variant family as besides an R derivative, the company seems to be cooking up a more frugal yet still punchy GTE version. The vehicle was photographed by a member of VWVortex forum near the San Francisco airport.

Just like the hatchback, the model can be distinguished by its revised front fascia with blue accents, "GTE" badging and it likely features a charging port hiding behind the logo on the grille. Photos of the interior cabin are not available but it probably has several blue accents together with a 6.5-inch screen featuring driving range and energy flow monitors.

Power of the Volkswagen Golf GTE Variant is provided by a plug-in hybrid system encompassing a 4-cylinder, 1.4-liter TSI engine working together with an electric motor and a lithium-ion battery pack that has a capacity of 8.8 kWh. The combined setup stands at a respectable 204 PS (150 kW) and 258 lb-ft (350 Nm). It should be a bit slower than the hatchback which needs 7.6 seconds until 62 mph (100 km/h) before topping out at 138 mph (222 km/h).

The plug-in hybrid wagon can run solely on electric power for approximately 31 miles (50 km) and once it runs out of juice it will take three and a half hours to fully recharge the battery pack from a regular power source. Used as a hybrid it can return 130 mpg US (157 mpg UK or 1.8 liters / 100 km) with corresponding CO2 emissions of just 35 g/km and features a total range of around 584 miles (940 km).

An official reveal will likely occur in the months to come.