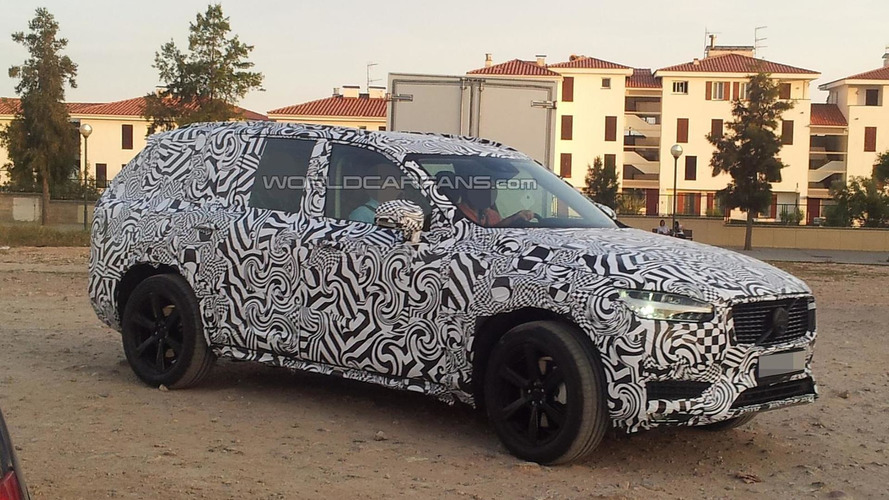 The all-new 2015 Volvo XC90 has been spied undergoing testing somewhere in southern Europe wearing a black & white camouflage unlike previous prototypes which had a bulky black plastic camo.

Set to become Volvo's most important model in recent years, the second generation XC90 has returned in a new batch of spy shots showing a different camouflage that provides a better view of the SUV's shape. The prototype was caught on camera testing alongside the outgoing model in southern Europe prior to a full reveal set for August with a styling that will likely be influenced by the appealing Concept XC Coupe shown at NAIAS back in January.

The Swedish marque has already released extensive details, images and videos with the XC90's interior cabin which dare we say looks remarkable and packs the latest technology in terms of infotainment with a huge touchscreen display as well as a Bowers & Wilkins sound system and support for Apple's CarPlay.

Although it's now under Geely ownership, the upcoming XC90 will remain a proper Volvo as it will pack a wide array of assistance and safety systems such as Adaptive Cruise Control with Steer Assist, a smart seat belt pre-tension system, Pedestrian Detection In Darkness, Road Edge and Barrier Detection With Steer Assist and others as well.

The 2015 Volvo XC90 will ride on a brand new Scalable Product Architecture (SPA) co-developed with Geely which makes extensive use of aluminum to shave off weight and will also boast a new electrical architecture to easily accommodate the latest developments in microprocessors, sensors and cameras.

Motivation will be provided by brand new Drive-E engines which will include four-cylinder units while a plug-in hybrid derivative is set to join the range later during the car's lifespan.

Slated to be unveiled this August, the 2015 Volvo XC90 will enter production at the beginning of next year at the Torslanda factory in Gothenburg in Sweden.