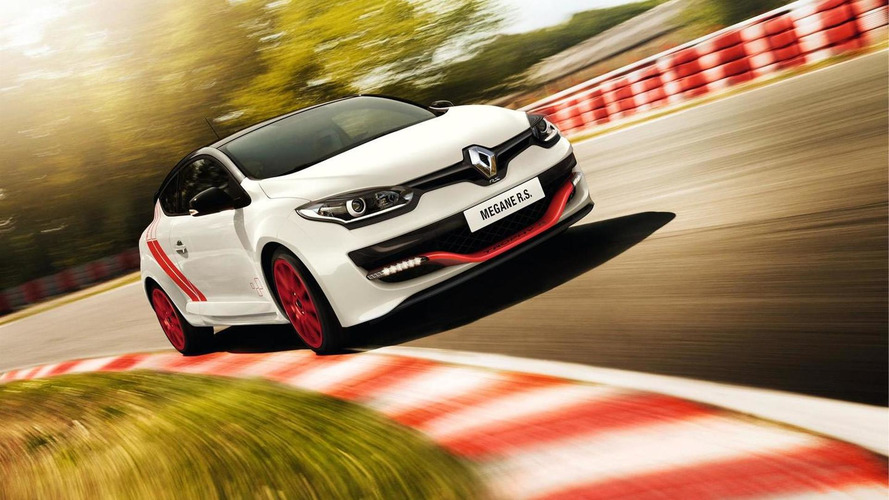 Renault has unveiled a hardcore Megane RS 275 Trophy-R special edition that managed to take down the front-wheel drive record on the Nürburgring.

Renault has unveiled a hardcore Megane RS 275 Trophy-R special edition that managed to take down the front-wheel drive record on the Nürburgring.

About a month ago Renault launched a more potent Megane RS 275 Trophy and now they have taken the wraps off an extreme Trophy-R limited edition which has managed to improve Seat Leon Cupra 280's Nürburgring record for a front-wheel drive car by about four seconds, lapping the Nordschleife in 7 minutes and 54.36 seconds.

Compared to the standard RS 275 Trophy, the R version has lost almost 100 kg (220 lbs) as a result of removing the rear seats as well as most of the sound-absorbing and insulating materials. In addition, the engineers installed a smaller battery, removed the radio and air conditioning system and mounted lighter Recaro bucket seats made from a single piece of polycarbonate.

The vehicle is wearing a two-tone paint scheme with a pearlescent white body and a black roof, together with a checquered flag graphic and an F1-type front blade with the Trophy-R branding. It rides on 19-inch black or red Speedline wheels and comes with a standard three-point seat belt or an optional six-point harness with aviation-style buckle.

Production of the Renault Megane RS 275 Trophy-R special edition will be capped at 250 units and these will be sold in 15 markets starting later this year.