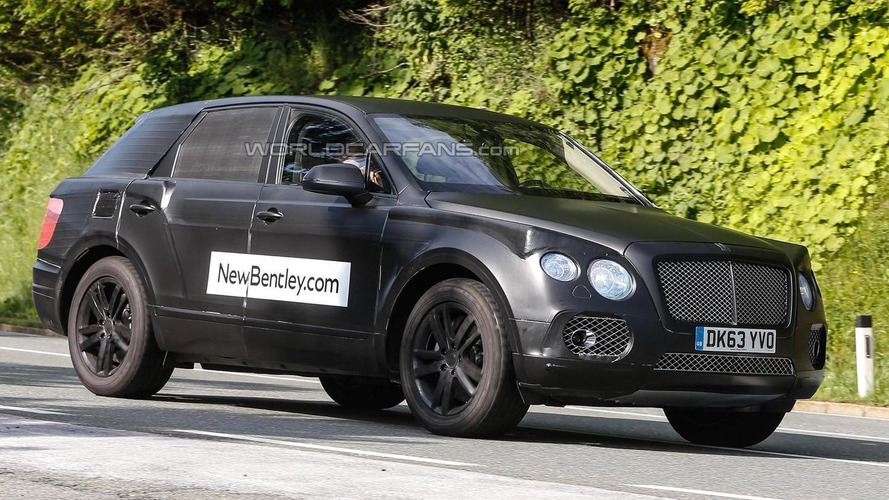 A Bentley crossover prototype wearing the production body has been spied once again in the Alps.

A Bentley crossover prototype wearing the production body has been spied once again in the Alps.

The first ever crossover to wear a Bentley badge will come out in 2016 and promises to be the most luxurious model in this segment. The model was previewed more than two years ago with the EXP 9 F concept but its design was very controversial so the production model will adopt a considerably modified appearance.

The spotted prototype wears a full body camouflage so there's not a lot to say as far as the design is concerned but expect to find Continental GT and Flying Spur cues. We remind you Bentley said about a year ago that "styling will set it apart from any other SUV on the road and will be true to the Bentley design DNA." Previous spy shots have shown it will boast circular air vents and a digital instrument cluster while the rest of the cabin will be lavished in metallic accents and wood trim.

Set to ride on the MLB Evo architecture, the 2016 Bentley crossover will probably be available with a V8 4.0-liter twin-turbo engine and the traditional W12 6.0-liter. A more frugal variant featuring a plug-in hybrid powertrain will be out sometime in 2017.

Production of the model will take place in Crewe, UK where Bentley will invest 800M GBP and add 1,000 jobs to get the crossover ready for production.