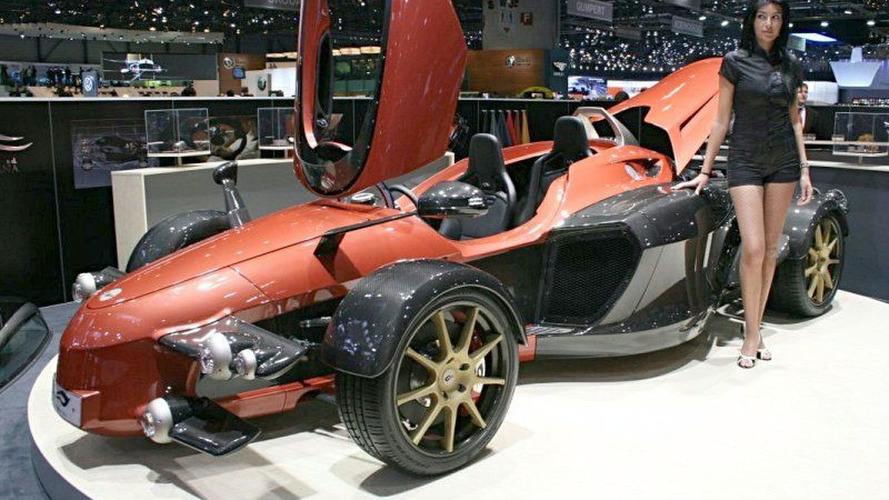 It came to the show as a concept, but this is the machine that will hit the market in a few months and will be as happy tooling round town as it is tearing 911s apart on track.

The city of Geneva is so totally overrun when the motor show comes to town that many, including me and the 2005 World Ferrari Challenge Champion, end up in pokey hotels out in the middle of nowhere struggling to comprehend why this tiny city commands this level of respect on the motoring calendar.

But this is where the world comes to display its heaviest artillery, so it makes the mortgage-threatening taxi trips and hotel rooms so ill-equipped the shower doesn’t even come strapped to the wall more than worth it.

Cars like the Spyker C12 Zagato could make even the Mona Lisa smile, it’s that damned funny. Penned by Andrea Zagato’s legendary design studio this has taken the already mental C12 to a whole new level with a front end vaguely reminiscent of a Corvette and a rear that looks like a cartoon. With the bubble canopy roof they are almost looking to take it too far, and that’s before you open the door and check out the ornamental yacht of an interior.

It’s a car that truly takes the Mickey on every single level, especially with prices starting from €490,000 excluding all local taxes. There will only be 24 of them, though, ever, and if you make something expensive enough then someone will buy it – so it will be with the Spyker, there won’t be a single one left.

And if you want to look at a truly mental car, try the Tramontana G-07. This Spanish firm showed a bizarre prototype at Geneva last year that nobody thought would truly make it, but they were back with the production version of blend of a jet fighter, F1 car and yacht.

Powered by the 5.5-litre twin turbo Mercedes engine that propels overfed executives to meetings all day long, this two seater comes as a 545bhp or 712bhp road rocket with €300,000.

Built around a carbon-fibre monocoque, which serves as the basis for all top level racing cars, the Tramontana is kept to ballerina weight by use of magnesium and other exotic materials, including gold for the badge. So there’ll be no room for the exotic dancer girlfriend if you head out in this machine, you’ll need a security guard to stop some thieving teenager taking it for a trophy.

Still, the Tramontana should be as fast as anything on God’s Earth, and probably more fun, and personally I cannot wait to drive this car.

There was also some hot scientific news, words that are rarely heard together in the same sentence. See the environmental movement was meant to spell the end of the SUV, supercars and fun as we know it, but those boffins in the backrooms of Sweden might just have found the answer – a Biofuel supercar.

Koenigsegg rocked the world with its CCX and now, with the use of high-octane biofuel has cleaned up its act and increased the power with the simply stupid 1018bhp CCXR.

With a broad snout and no extraneous wings and tips, it looks like a brute. The Koenigsegg is a broad sledgehammer of a car when compared to the delicate and ever so slightly effeminate Pagani Zonda, for instance, but there’s no arguing with the performance and now, with ethanol-based fuel, it will go even quicker.

The Koenigsegg should go well beyond 250mph and challenge the Bugatti Veyron’s position as the fastest car in the world, while at the same time making it a sexy flag bearer for green values. And that will annoy the hell out of some sandal-wearing, lettuce-eating environmentalists that object to sports cars on pure principle, which is another good thing.

Sweden may well be the home of wonky yet startlingly cheap furniture, but it may also have provided the template for green yet fun motoring.

Lamborghini didn’t worry too much about the environment at this show, it concentrated on pure entertainment with the Gallardo Superleggera, a lightweight version of the original car with a gentle power boost to boot. They’ve massaged the V10 engine up to 530bhp and shaved a massive 100kg off the Gallardo’s hips, inner thighs and interior to produce a 1330kg road rocket.

Now that only adds up to a 0-60mph time that is 0.1s faster, but thanks to a new, trim figure and aero package the Gallardo will swoop through bends like a bullet train and on a lap should pose a very serious threat to the Murcielago. Serious drivers that are after a Lamborghini now have only one choice, and it’s not the most expensive one there…

Maserati brought its new GranTurismo model to the show, too, flanked by a bevy of desirable ladies, although just for once it has to be said that the car truly outshone the girls.

Designed by the legendary Italian studio Pininfarina, which has worked on most of the great Ferraris, this car is achingly beautiful from the long, bulging snout right through to the muscular rear that contains more than a hint of Aston Martin.

This four-seater comes with a 4.2-litre V8 with 405 rampaging horses and 339lb/ft of torque. The only downside is that it comes attached to the recalcitrant semi-automatic gearbox that has been known to turn folks off the brand for good. But if drivers can cope with the jerky box then they’ll get to 60mph in 5.2s and on to 177mph.

More importantly, they’ll do it in style. Maseratis are all about the looks and refinement, rather than the balls-out speed favoured down the road at Ferrari, and owners will have the option of designer luggage to go with their purchase – which says a lot really.

The Lotus GT3 concept would have been right up there with the best of them if it was new, as with an 835kg kerbweight and 271bhp at its disposal it’s undoubtedly going to be one of the fastest weapons on the road. It’s based on the car that won the British GT3 Championship, will undoubtedly go into production when enough loyal customers demand one and is a sexy piece of kit.

But the Exige is becoming a little like washing powder, just when you thought your clothes were clean a new variant from the same brand comes along and gets them that touch whiter – you get immune.

Every new variant is hailed as the most powerful, the fastest, the most fun you can have on wheels, and just when you thought the last generation and Lotus really need a new car to replace the Exige. Just tinkering with it is no longer enough.

As for the Audi S5, well it looks good, with 350bhp and four-wheel drive it should be fast enough and some people will buy it. But again you start to wonder just why it was necessary. The A4 and A6 line-ups fit clearly defined needs, for those desperately climbing the ladder and those perched comfortably near the top.

The S5 seems to be a car without a point, niche engineering, tinkering for the pure sake of it, and I can’t help feeling that this car will prove a massive disappointment to Audi if not the folks that drive them.

Possibly the most important sports car here was the everyman’s supercar that is the BMW M3. It was here in concept form, but it’s coming soon, and the big news is that it’s going to arrive with a six-speed manual transmission.

We all knew about the V8, we'd mostly heard the horsepower figure of 420bhp, but we weren’t sure about the transmission and now we know common sense has triumphed. The seven-speed sequential on the M5 and M6 might be clever, but it’s boring and the full ‘box and clutch in the baby M car is the best news of the show.

So not only should this beast scorch to 60mph in around 4 seconds it will also be a laugh riot round each and every bend.

It came to the show as a concept, but this is the machine that will hit the market in a few months and will be as happy tooling round town as it is tearing 911s apart on track. With sleek looks that mark the very best of Chris Bangle’s work, too, this new model has us all salivating with anticipation.

There’s more, there are always more, but that’s the succinct highlights of Geneva, that and a shower that wasn’t even stuck to the wall…