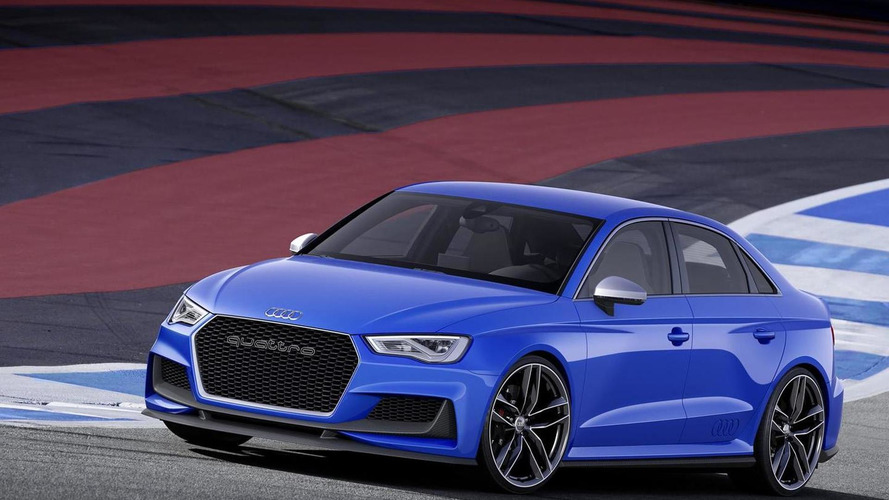 Audi has unveiled online today the A3 clubsport quattro concept which will be shown in public in a couple of weeks at Wörthersee (May 28-31).

Audi has unveiled online today the A3 clubsport quattro concept which will be shown in public in a couple of weeks at Wörthersee (May 28-31).

Tipping the scales at 1,527 kg (3,366 lbs), the Audi A3 clubsport quattro concept needs only 3.6 seconds for the 0-62 mph (0-100 km/h) sprint and can reach a top speed of 192.6 mph (310 km/h). These numbers were possible by installing a larger turbocharger as well as a different intercooler. All that power is channeled to a quattro all-wheel drive system through a seven-speed S tronic gearbox equipped with launch control.

Compared to the S3 Sedan, the concept here has received a sportier suspension setup that has lowered the body by 10mm while for wheels Audi selected a 21-inch set with 275/25 R21 tires stopped efficiently by the carbon fiber ceramic disc brakes.

The A3 clubsport quattro concept wears a Magnetic Blue exterior paint scheme on the more aggressive body which includes CFRP front blade and side sills, together with a big rear diffuser and dual oval exhaust pipes. Audi's Matrix LED headlights have been installed onto this concept which adopts a familiar cabin layout with bucket seats equipped with four-point seatbelts while the luggage area offers enough room for two racing helmets.

For the moment there aren't any plans to put the concept into production but this could be Audi's way of saying the 5-cylinder 2.5 TFSI will find its way under the hood of the upcoming RS3.