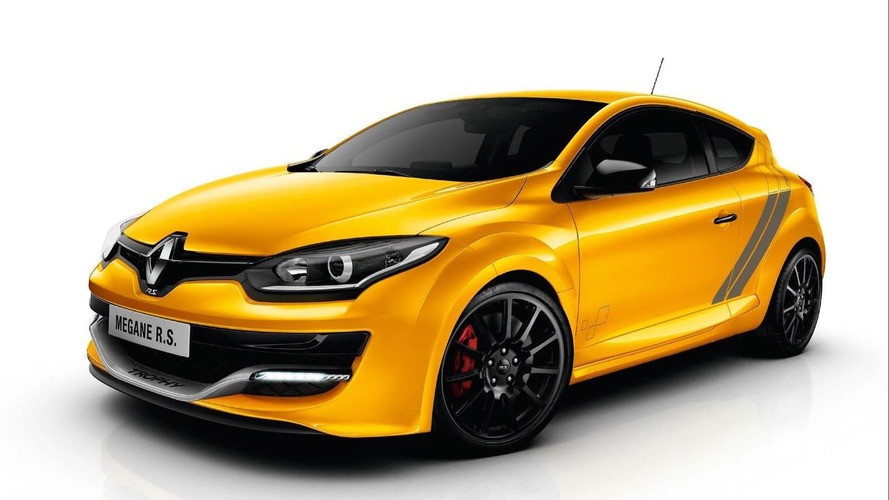 Renault has taken the wraps off the Megane 275 Trophy limited edition which brings a series of technical improvements.

Renault has taken the wraps off the Megane 275 Trophy limited edition which brings a series of technical improvements.

As expected, Renault's #UNDER8 project is an uprated variant of the Megane Trophy that wants to claim back the title for the fastest front-wheel drive at the Nürburgring. The title currently belongs to Seat's Leon Cupra 280 which lapped the Nordschleife in 7 minutes and 58.4 seconds. After losing its title, Renault is striking back with this limited-run Megane Trophy packing an extra 10 PS for a total of 275 PS (202 kW) generated by the 4-cylinder, 2.0-liter turbo which has a peak torque of 360 Nm (265 lb-ft).

The added oomph was possible by installing an Akrapovic titanium exhaust system which is also lighter than the standard exhaust and provides an angrier soundtrack. It comes as standard with the Cup chassis with a limited-slip differential and can be optionally configured with adjustable Öhlins Road & Track dampers with steel springs derived from the Megane N4 rally car. For those who are fans of track days, Renaultsport is offering optional Michelin Pilot Sport Cup 2 tires created specifically for the Megane 275 Trophy.

It wears a new yellow livery with Trophy branding and can be ordered with optional black 19-inch Speedline Turini wheels while on the inside there are leather & Alcantara Recaro bucket seats with red stitching. Other highlights include an alloy gear lever knob and Alcantara-wrapped steering wheel and handbrake gaiter.

Details about the car's Nürburgring lap time will be revealed on June 16 but according to a recent rumor the Megane Renaultsport 275 Trophy has already managed to establish a new record for a front-wheel drive car with a lap time of 7 minutes and 45 seconds.