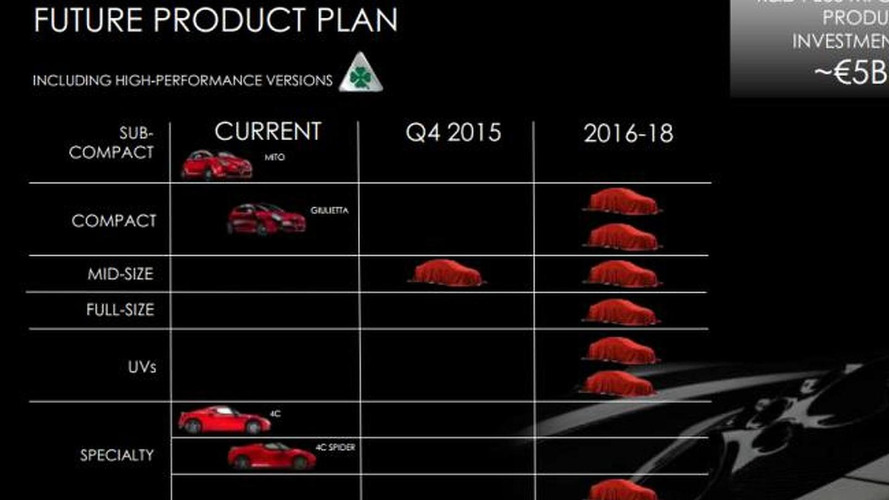 In order to ensure this will happen, Alfa Romeo will become a "skunkworks" project which will be have day-to-day operations ran by two senior heads from Ferrari. The company will also employ top engineers and receive "no interference" from Fiat Chrysler Automobiles. Alfa Romeo says these changes will help them deliver best-in-class rear and all-wheel drive vehicles that are "industrialized in Italy."

Alfa Romeo was coy on specifics but things will kick off in late 2015 when the company introduces a mid-size model. It will likely be the highly-anticipated and often-delayed Giulia.

The model will eventually be joined by two compact cars, another mid-size model, a full-size model and two crossovers. There will also be a "specialty" vehicle which will apparently slot above the 4C Spider. Alfa Romeo didn't pin down the launch dates but the aforementioned models are slated to arrive between 2016 and 2018.

Besides announcing a handful of new models, the company also released some preliminary engine data. According to Alfa, their four-cylinder petrol engines will have outputs ranging from approximately 110-330 bhp. Their six-cylinder petrol engine will be significantly more powerful as it will develop between 400-500 bhp. We can also expect four- and six-cylinder diesel engines with outputs of up to 350 bhp.