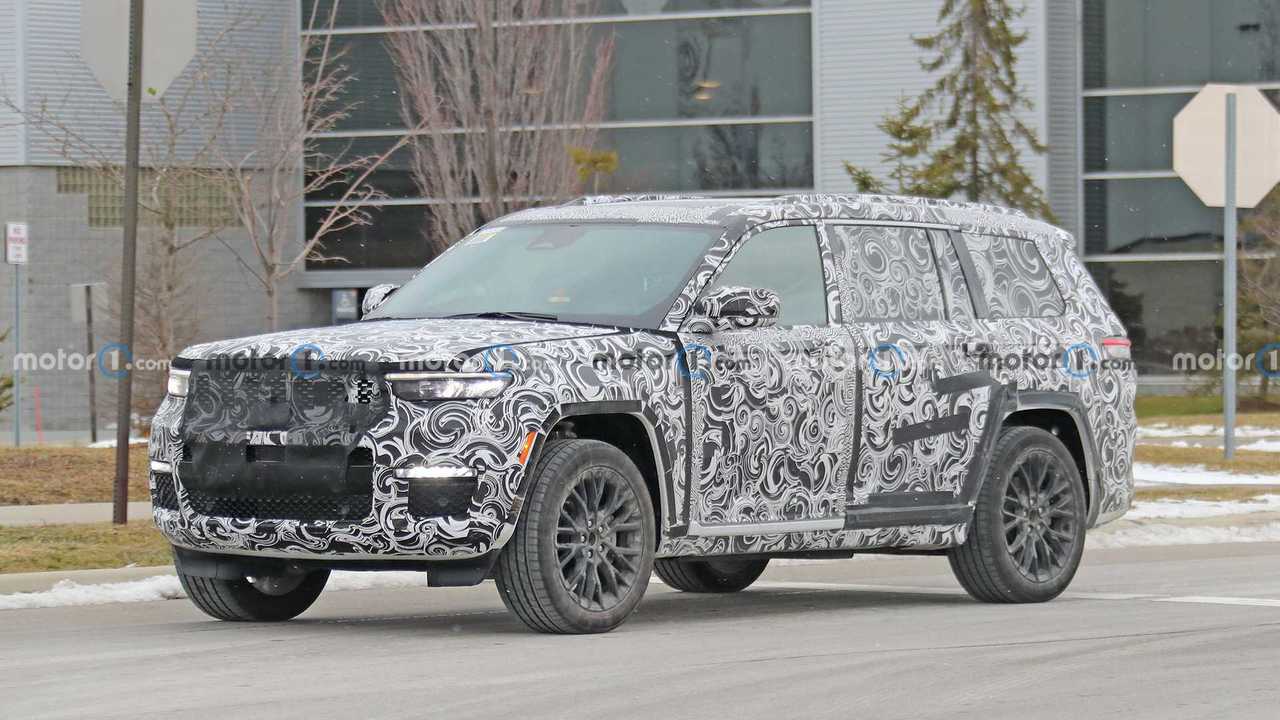 The SUV will slot in above the two-row Grand, but below the Wagoneer family.

The current Jeep Grand Cherokee is quite long in the tooth, hitting the market for the 2011 model year. Two facelifts and lots of incremental changes have kept the SUV competitive, but all good things must come to an end. However, as these spy photos suggest, the next-generation 2022 Jeep Grand Cherokee might be even better – and it’ll certainly be larger.

Recently spotted testing without any camouflage was a three-row version of the Grand Cherokee, which we’ve seen before. However, these photos show the test mule wearing less camo than ever, giving us a very good look at the new SUV – and corroborating our rendering of the new SUV, which we predicted with 99 percent confidence.

Up front are narrow headlamps bookending a slightly pinched, forward-leaning grille, with a large bumper-mounted air inlet and two fog light nacelles below. Trapezoidal wheel openings are a Jeep signature, housing lacy wheels that appear to hearken back to the original, first-generation Grand Cherokee. The traditional SUV styling should also be pretty aerodynamic – witness the front airdam and smoothly integrated roof rails. Narrow taillights bleed from the quarter panels to the hatch, which is more upright than on the current Grand Cherokee, likely to create room for a third row of seats.

That’s because the next-generation midsize SUV will offer seating for up to seven passengers, courtesy of this extended-length body style. Riding on the same wheelbase as the two-row Grand, this three-row version will boast more cargo space and a two-place bench in the way-back, giving the sport-ute some added utility for folks who occasionally need to drive the carpool. That said, the three-row version of the Grand Cherokee likely won’t be large enough for a family of six or seven. If that’s you, don’t worry: Jeep will soon offer the body-on-frame, Chevrolet Suburban–sized Wagoneer and Grand Wagoneer SUVs.

Instead, expect the Grand Cherokee to rival the Toyota Highlander and Subaru Ascent at the lower end or the Mercedes-Benz GLE and BMW X5 in higher trims. And as expected of anything wearing a seven-slat grille, the 2022 Grand Cherokee should offer lots of off-road capability. Now riding on the Giorgio platform – shared with the Alfa Romeo Stelvio – the Grand Cherokee should offer even better on-road dynamics than its composed predecessor, but Jeep’s lineup of excellent four-wheel-drive systems are all but guaranteed to show up under the skin.

Expect a carryover 3.6-liter V6 to serve as the base engine, mated to the excellent TorqueFlite eight-speed auto. Replacing the optional 5.7-liter V8 will be a turbocharged 3.0-liter inline-six with mild-hybrid capability. Jeep will also offer a plug-in hybrid 4xe powertrain, making use of a 2.0-liter inline-four, boosted with a turbocharger and two electric motors to produce a stout 375 horsepower (280 kilowatts) and 470 pound-feet (637 newton-meters). Marking the first time a four-cylinder engine will be available in a Grand Cherokee (at least in the US), the plug-in will nonetheless offer plenty of power for the premium SUV.

A diesel engine will follow; ditto a high-performance successor to the SRT and Trackhawk models (though as with the main 2022 Grand Cherokee lineup, don’t expect big V8s under the hood anymore). The new Jeep Grand Cherokee should debut within a few weeks before going on sale sometime in the second half of 2021.