2022 Subaru Forester Facelift Rendered To Strip Off The Camouflage

The changes are subtle but keep the crossover looking modern.

The Subaru Forester is on track to be the brand's bestselling model in the United States in 2020, and the company is doubling down on the success by preparing a refresh for the popular crossover. After seeing spy shots of the updated model, the folks at Kolesa have a rendering imagining how it might look.

As with most refreshes, don't expect any revolutionary design changes. The comparison below shows the 2022 model with a boxier grille and relocated crosspiece that shifts the Subaru badge lower on the vehicle's face.

The revised lower fascia has somewhat larger openings in the corners, and the fog lights remain there. The opening in the center is bigger, too.

Expect only the smallest changes along the Forester's flanks. Subaru might change some of the trim, but the crossover is going to look the same, in general.

The changes to the rear are very minor. A revised bumper no longer has an opening for the exhaust outlet, which creates a somewhat cleaner appearance back there. The hatchback is a bit smoother, too.

There are no details yet about how Subaru might change the refreshed Forester's interior. The usual recipe these days involves updating the infotainment system with a bigger screen and tweaking the cabin's materials.

See The Spy Shots Of The Refreshed Forester: 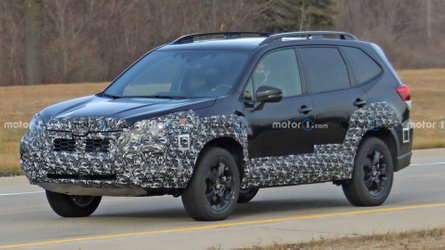 Powertrain changes are similarly mysterious. Expect the 2.5-liter flat four-cylinder engine to stick around. In a dream world, Subaru would re-introduce a turbocharged version of the Forester by installing the brand's 260-horsepower (194-kilowatt) 2.4-liter powerplant into the crossover. Although, there's no evidence that this is what the automaker plans to do.

Look for the refreshed Forester to debut in the first few months of 2021. Sales should begin in the second half of the year.