There's nothing fair about this fight, but it still offers some surprises.

We wouldn't blame you one bit for some intense eye-rolling right now. In what possible universe could a bone stock, 760-horsepower, 4,300-pound Mustang Shelby GT500 beat the Hoonicorn? Ken Block's bonkers all-wheel-drive Mustang has nearly double the power and is a gazillion pounds lighter. In a fair fight, the Shelby has absolutely zero chance of success.

However, we aren't sharing this video to showcase the results of a heads-up drag race. This is the latest contest in Hoonigan's Hoonicorn Vs. The World series where Block and his Mustang race a menagerie of performance machines. Thus far, none of the competition has been an apples-to-apples match for the monster Mustang, though Rob Dahm's insane four-rotor AWD RX-7 was pretty close. As a result, the races are a best-of-three match that begins with the Hoonicorn winning, followed by some measure of handicap to level the playing field. 99 times out of 100, Block still wins. 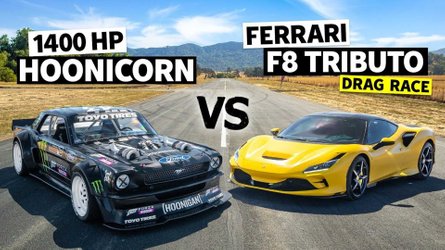 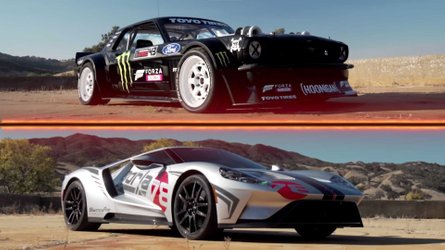 This clip starts out the same as the rest. Our own drag racing experience with the GT500 confirms the car has serious trouble getting power to the ground, and as such, it's absolutely humiliated in a side-by-side race with the Hoonicorn. The second race eliminated the GT500's weakness by launching from a 50 mph roll, with Block and his all-wheel-drive Mustang starting from a dead stop. To considerable surprise, the GT500 held off the Hoonicorn at the other end of the track to win.. by several car lengths. Could something be wrong with the mythical Mustang?

Yes. It was running out of gas. Or at least, that was the claim.

With the tank topped off, a third run with the same parameters takes place and the GT500 still wins. This time the margin of victory was barely a car length, and the Hoonicorn was charging hard. But there's no denying the serious top-end performance baked into Ford's showroom stock pony. Considering the massive difference in both weight and power, it's an impressive showing for the Shelby, even if it did have a considerable starting-line advantage.

So technically, the Hoonicorn lost this battle but somehow, we don't think Block's feelings are hurt. Perhaps that could change should the series present an actual challenge to the Hoonicorn's prolific power.