Want a roadster? Daihatsu has them in two flavors.

The Tokyo Auto Salon is only happening virtually in 2021, but that's not stopping automakers like Daihatsu from showing off their customized vehicles originally for the aftermarket-focused event. This year, the Japanese automaker keeps things whimsical by calling its display the Daihatsu Village Colorful Carnival with a theme of "new ways to have fun."

Starting with by far the weirdest but certainly fun, there's the Daihatsu Hijet Jumbo Sportza Ver. It's based on the company's Hijet commercial vehicle with the Jumbo extended cab, but the automaker takes a buzzsaw to the upper half of the body to create a roadster.  There's now a sporty front fascia and a tiny windshield. Occupants sit in a pair of sports seats with tiny nacelles above them. The back has a huge cargo bed, and a three-outlet, side-exit exhaust is underneath. Compared to the normal version, the ride height is significantly lower, and there is a set of red, six-spoke wheels.

Daihatsu makes no mention of any powertrain changes for the Sportza. The standard model makes 46 horsepower (34 kilowatts) with the five-speed manual or 52 hp (39 kW) with the four-speed automatic. Buyers can get the little commercial model with rear- or four-wheel drive.

If you'd prefer a more capable vehicle, there's the Hijet Jumbo Camper Ver. It has a camouflage covering over the rear and roof rack. The front features a happy face with circular headlights that look like eyes, and a lower section that has the appearance of a smiling mouth.

Daihatsu's announcement doesn't offer any specifics about what's inside the camper section.

The company's customization team rev up the saw again for the Copen Spyder Ver. This one loses most of its windshield and roof to turn the convertible into a dedicated roadster. There are also now nacelles on the rear deck.

The Daihatsu Taft Crossfield Ver takes the brand's little crossover and makes it more capable of performing off-road. There's a higher ride height and chunky tires. A new front fascia with an integrated winch looks like it would improve the approach angle. A brush bar protects the headlights. A roof rack offers extra space for carrying gear.

Finally, there's the Thor Premium Ver with D-sport components. It wears a colorful teal and silver paint job. It rides on big wheels and has an updated front fascia. 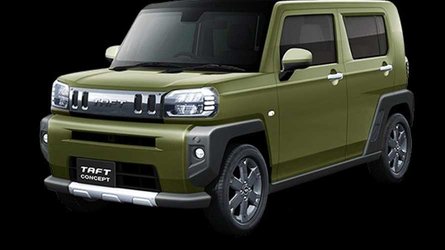 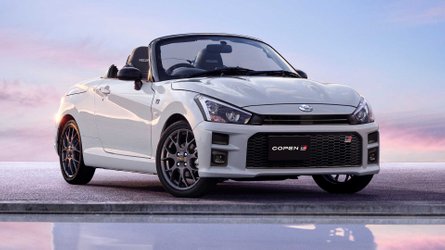