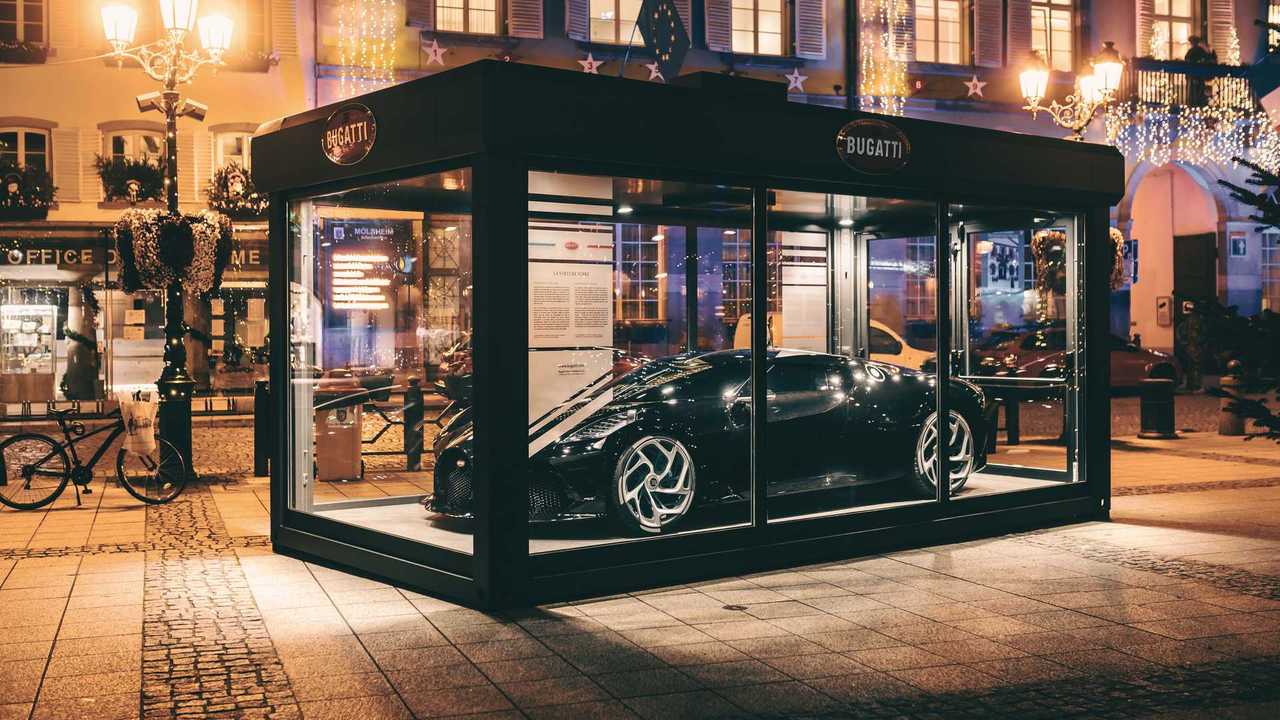 Who needs a Christmas market when you have the world's most expensive new car on display?

The coronavirus pandemic has canceled Christmas markets in most parts of the world, and that includes Bugatti’s home turf in Molsheim. However, the people behind the W16 hypercar have thought of a neat way to inject some holiday cheer into the commune in the Bas-Rhin department in Grand Est in north-eastern France. How? By putting the La Voiture Noire in a glass container for everyone to admire.

The world’s most expensive car will be up on display for an extended period of time as Bugatti plans to keep it there until the end of March. It’s worth pointing out we’re looking at the very same showcar originally introduced in March 2019 at the Geneva Motor Show. In other words, this is technically an EV as it lacks the quad-turbo W16 8.0-liter engine, replaced by electric motors to allow Bugatti to (slowly) move it across short distances.

The fact that all the windows are blacked out tells us the interior is incomplete and Bugatti obviously wants to hide the unfinished cabin. It’s a common occurrence for showcars, concepts, and prototypes to mask their work-in-progress interiors by using blackout window film for all the glass. It'll be interesting to see how different the cabin will be considering the car costs nearly five times more than the base Chiron.

When Bugatti unveiled the Chiron-based La Voiture Noire at the Swiss show, it said it would take about two and a half years to finish the car. It means the mysterious buyer who agreed to pay a whopping €11 million (about $13.4M at current exchange rates) will likely have to wait until towards the end of 2021 to take delivery of the one-off machine that pays tribute to Jean Bugatti’s lost Type 57 SC Atlantic.

This isn’t the first time Bugatti is displaying one of its cars during the holiday season as it had a white Chiron in 2018 at the Strasbourg Christmas market while in 2019 it displayed the Centodieci at the Entzheim Airport. Eagle-eyed readers will notice the La Voiture Noire currently displayed in Molsheim isn’t in immaculate condition since the brake caliper of the front-right wheel appears to be damaged.

The Most Expensive Chiron Of Them All: