It looks like a LaFerrari Aperta, but there are quite a few changes.

When Ferrari published its 2018-2022 roadmap, the Purosangue got most of the attention among members of the press and fans of the Prancing Horse. The folks from Maranello also talked about expanding the lineup beyond the launch of an SUV, not just in terms of model launches, but also in regards to a newly developed V6 powertrain.

Speaking of engines, one of the slides presented during the Capital Markets Day a little over three years ago was for the twelve-cylinder engine. While Ferrari didn’t explicitly talk about a LaFerrari replacement, it did promise “continuous developments” of the V12 family. We should be seeing some of the upgrades soon in the 812 GTO (name ot confirmed), but the real leap forward will be a new hypercar.

The LaFerrari Replacement Is In The Works: 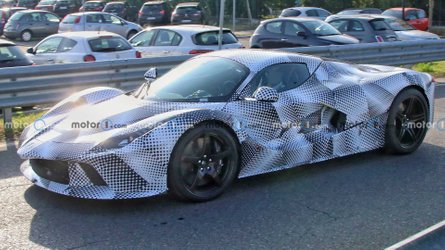 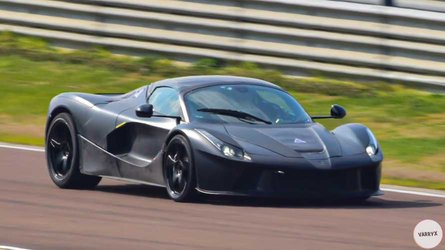 A test mule based on the LaFerrari Aperta has been spotted undergoing testing at the Ferrari-owned Fiorano circuit in Italy. Interestingly, the vehicle sat on five-lug wheels rather than center-lock wheels and lacked the central fin of the front bumper. It was also missing the central air vent on the front hood, and we could say the same about the F1-styled light at the back.

Also at the test mule’s derrière, the rear glass is much shorter as it no longer extends all the way back. The rear fender air vents that flank the engine cover on a regular LaFerrari Aperta appear to be different, further suggesting we’re looking at more than just a camouflaged prototype of Ferrari’s defunct flagship.

While Ferrari has vowed to keep the V12 alive for as long as possible, expect the company’s next range-topper to rely more on electrification than the LaFerrari. It goes without saying the combined output will eclipse that of the already ultra-potent SF90 Stradale (986 hp), so it’s safe to assume it will hit the 1,000-hp mark. Factor in the instant response of an electric boost, the next crown jewel of the range should deliver some neck-twisting acceleration.

When should we expect to see the LaFerrari successor? The fact this test vehicle uses a modified old body tells us it will take a while. Taking into account the Purosangue SUV and an all-new V6 model will be coming out first, the next king of the Maranello hill probably won’t be unveiled sooner than 2023.