The results may surprise you.

It’s no surprise that the Mustang is one of the great muscle cars of all time. It has proven its place as a bad mama Jama, but the Shelby GT500 Track Pack shows a detour from straight-line specialist to something resembling a track day weapon. As such, Speed Phenom’s latest video features a half-mile drag race between the best Mustang money can buy and the C8 Corvette.

Keeping with the true ethos of Carol Shelby, the snake is fitted with a 760-horsepower (567-kilowatt) 5.2-liter supercharged V8. Along with big reserves of power, it comes with a host of carbon-fiber goodies including carbon wheels; along with being very light, the new rims reduce the unsprung mass of the car, which can have a positive effect on acceleration.

Most petrolheads will know the C8 Corvette as a track day specialist, but you’d be remiss not to mention its 495-hp (369 kW) 6.2-liter V8 engine. No surprise, it’s down on power relative to the Blue Oval’s offering, but we wouldn’t count it out for a second in a drag race. The Vette has technology on its side; its aggressive gearing and intelligently designed dual-clutch transmission can make up a big difference in acceleration. 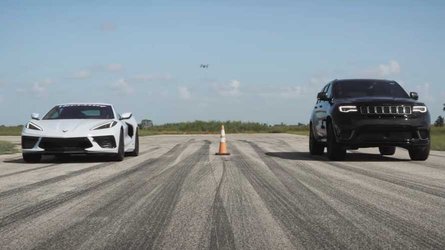 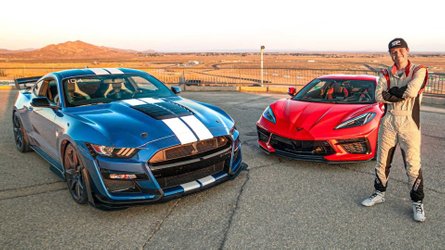 After a couple of practice runs against a ZL1 Camaro, Speed Phenom a.k.a Austin was ready to face the C8. Following quite the build-up, the big moment was short-lived as he biffed the start and couldn’t make up the disadvantage before the finish line. We don’t really know what happened, but along with an error at the start, he forgot to close the windows after launch.

Certainly disappointing, but as these events generally go, track time is limited and that was the end of it. Both vehicles definitely ended the day better than an Audi R8 that lost a wheel midway down the runway.