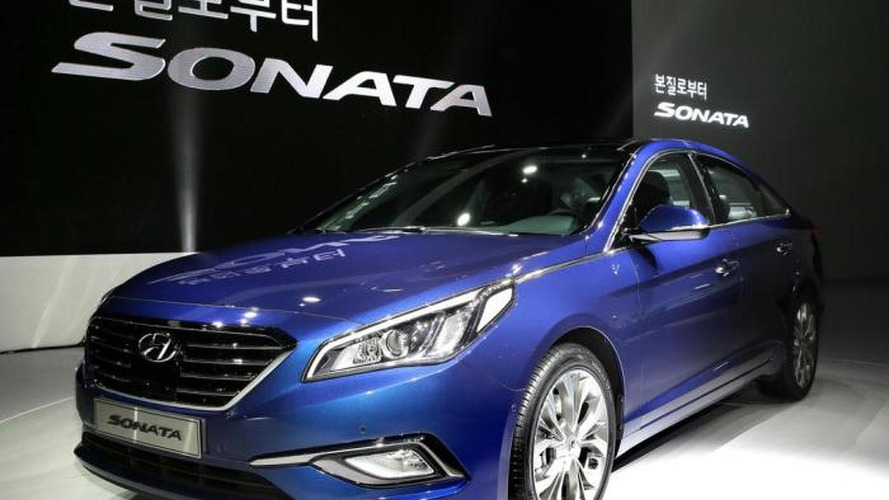 Hyundai has taken the wraps off the all-new Sonata at home in South Korea, following a teaser photo and some revealing spy shots published earlier this month.

Hyundai has taken the wraps off the all-new Sonata at home in South Korea, following a teaser photo and some revealing spy shots published earlier this month.

35mm longer and 30mm wider than its predecessor, the 2015 Hyundai Sonata has received a complete makeover sending a more premium vibe and borrowing a few styling cues from the larger Genesis to create a more sophisticated appearance. Hyundai says the new model has 41 percent greater torsional strength and 35 percent bigger bending strength while testing was done in several locations across the globe, including the Nürburgring in Germany and at the Mojave Proving Ground in California.

The vehicle is 4855mm long, 1865mm wide and 1475mm tall, with a 2805mm wheelbase and a 462-litre trunk. It can ride on a variety of 16- to 18-inch alloy wheels and benefits from a front MacPherson strut suspension combined with a rear multi-link arrangement. It comes equipped with bi-xenon headlights (with High Beam Assist) together with LED daytime running lights and taillights.

Inside Hyundai says they have improved ergonomics while at the same time installing more premium materials to create a more luxurious cabin for the passengers who will travel in safety thanks to six airbags, ABS, EBD, ESP and TCS systems, along with Advanced Smart Cruise Control, Lane Departure Warning System and Blind Spot Detection assistance systems.

Comfort features include heated and vented front seats, heated rear seats, electric rear window blind and rear side curtain blinds along with an eight-inch touchscreen display with support for USB, iPod and Bluetooth connectivity as well as smartphone integration.

Following its introduction on April 16 during the first press day of the New York International Auto Show, the 2015 Hyundai Sonata is programmed to go on sale on international markets in the second half of the year.

Full details about KDM version can be found in the attached press release.