The seller mentions the parts come from a disassembled car, likely a pre-production prototype.

We’ve been talking about an M5 CS for a little over two years and BMW has yet to unveil the car. It’s supposedly coming soon as a new report from Bimmer Post suggests production will kick off in March 2021. It will be built until February 2022, which means availability will be rather limited as with the M2 CS and M4 CS.

While previous reports have stated it will pack more punch, it turns out that won’t be the case as it will have the same 617 horsepower as the M5 Competition. So, what’s new? Well, not much. Bimmer Post claims it’s getting carbon fiber seats, bespoke wheels, and a bit more carbon fiber in the body. The middle rear seat will be removed and we’ve seen in spy shots the super sedan will get a trunk lid spoiler. Ceramic brakes are on the menu, as is a CFRP roof to shed a little bit of weight from what is otherwise a heavy car.

Even though the M5 CS hasn’t been officially revealed, someone from Poland is already selling parts. How is this possible? The listing says the bits and pieces come from a dismantled car, which leads us to believe they originate from a pre-production prototype. Oddly enough, the vehicle seems to have been built to US specification judging by the orange side markers on the front bumper.

The seller mentions you can install these parts on a pre-facelift M5, which isn’t all that surprising. The dashboard appears to be wrapped in Alcantara and seems to be based on the pre-LCI M5. The production-ready car will surely have the latest digital gauges, iDrive display, and the M shift lever. The interior setup goes to shows BMW was testing the M5 CS well before the Life Cycle Impulse by using now obsolete parts.

It's Been Spotted Repeatedly: 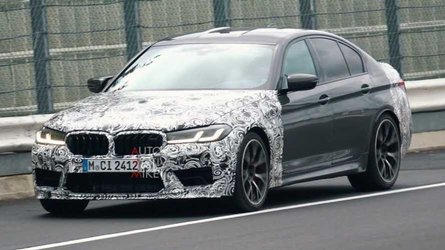 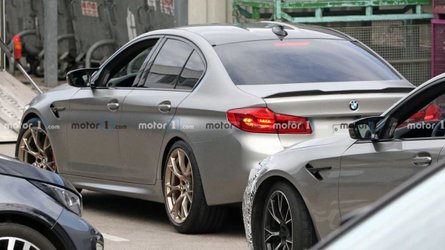 All in, you’re looking at the equivalent of nearly $13,000 for these prototype-sourced components. It’s strange that someone from Europe was somehow able to grab these US-spec parts and is now trying to sell them for a quick profit. Surely BMW isn’t too happy with this situation, right?

Note: You can see the ad in the source link below.