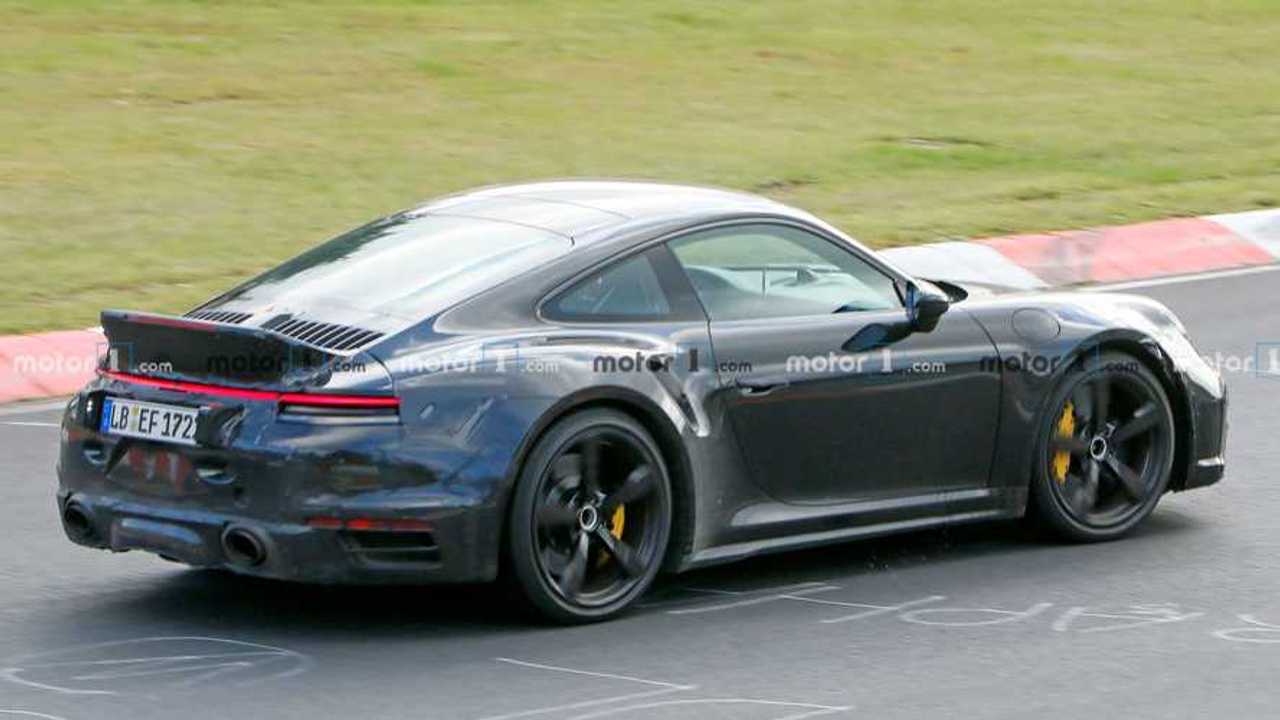 A lightweight 911 Turbo with some GT3 tech?

The 992-series Porsche 911 evolution continues. Recently we've had GT3 and GT3 RS prototypes dancing for our spy cameras, but every now and then we see this curious model. The rear haunches tell us it's a 911 Turbo, but it has that retrotastic ducktail spoiler pointing towards the sky. We've only seen it a few times in the last year or so, but we seem to learn a bit more with each look, and this sighting at the Nürburgring is no different.

The obvious feature on this test car is the spoiler, but other areas still have black tape and wrappings concealing features around the front fascia, rear fenders, and rear fascia. That suggests there are at least some additional styling tweaks in store for this special 911, and that lends credence to this being a rebooted Sport Classic model. Of course, the previous Sport Classic was based on a Carrera, not a Turbo.

Here's another theory, and this one is really starting to make sense. Previous spy shots of the ducktail 911 have given us blurry glimpses into the interior, enough to see a rollcage in the back. These new photos offer the clearest look yet of the inside, and what do we see? The rollcage is still there, along with a rear-seat delete. More importantly, we can see GT3 RS embossed on the passenger seat headrest. Sure, this is a prototype and Porsche may have simply tossed some GT3 RS seats in there for good measure, but maybe it's something more. In fact, we now suspect it's likely something more.

Take a 911 Turbo, toss in some of the weight-loss measures from the upcoming GT3 RS, add a ducktail spoiler with some other aero treatments both for flair and function, and you end up with something not as hardcore as a GT3, but with prolific power that can also tug on retro heartstrings. Our latest intel says this could well be the 911 GT that was teased in a bizarre manner back in September by the Petersen Museum through a Bring A Trailer auction. Initially, the cover on this car was thought to not conceal the ducktail wing, but our sources now suggest otherwise.

In any case, it may not be called the 911 GT or the Sport Classic and it ultimately might not be the car revealed in January. There's still much we don't know about this mysterious machine, but hopefully some answers will be revealed early next year or even sooner.