The 2021 Ford Edge arrives with a standard 12-inch infotainment display to replace the previous 8-inch screen. It's now running the Sync 4A software, rather than Sync 3, and includes built-in navigation with traffic and hazard information.

The 2021 Edge's cabin gains two more USB ports, bringing the total to four. One of the new plugs supports USB-C. New interior choices include a Ceramic color for the Titanium Elite grade and Cloth for the SEL.

On the outside, things barely change. There are new Carbonized Gray and Lithium Gray body colors. There are nine wheel options ranging from 18-inch Sparkle Silver-painted pieces that come standard on the SE to a 21-inch gloss-black-painted design for the Edge ST.

The Cutting Edge On The Ford Edge: 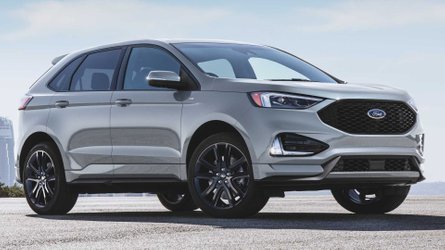 A rumor in June suggested that Ford was considering retiring the Edge in 2023 and replacing it with a new vehicle. The Blue Oval tallied 138,515 deliveries of the crossover in 2019. This was respectable but quite a bit less than the 241,388 units of the Escape and 168,309 examples of the Explorer in the same period. The COVID-19 outbreak has hurt the numbers by dropping volume to 76,862 vehicles in the third quarter – down 23.8 percent year-over-year.

With the Bronco and Bronco Sport joining Ford's range of crossovers and SUVs soon, the company might see an opportunity to introduce a new product to replace the Edge that could sell better.