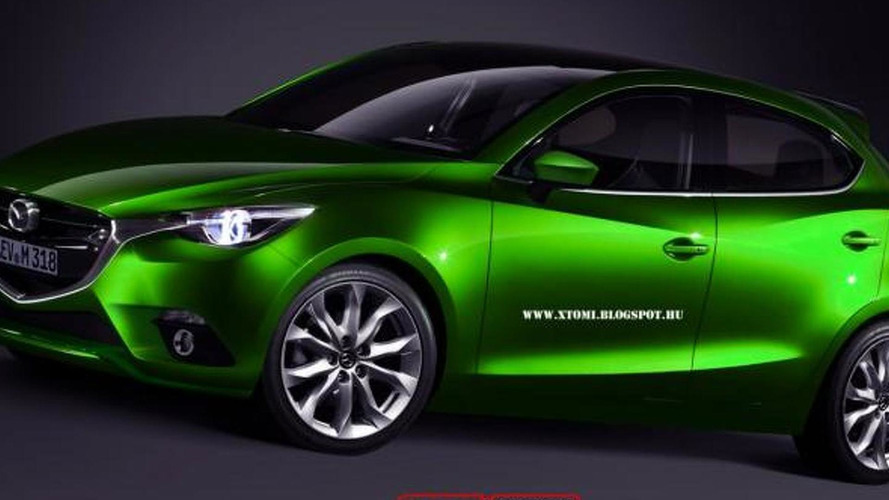 X-Tomi Design from Hungary has envisaged the next generation Mazda2 based on the Hazumi concept currently being showcased in Geneva.

X-Tomi Design from Hungary has envisaged the next generation Mazda2 based on the Hazumi concept currently being showcased in Geneva.

Now that Mazda has shown the Hazumi concept, it's no wonder renders of the upcoming Mazda2 are starting to show up. Seen here is a very possible look for the Japanese supermini slated to be unveiled most likely in October at the Paris Motor Show before an early 2015 market launch. The render shows a slightly toned down look with more production-ready headlights and a regular fog light + daytime running light arrangement.

In addition, the concept's flashy wheels are gone and now it has conventional mirrors instead of the concept's cameras. The 2014 Mazda2 render has regular door handles and even though there are several other minor changes, the overall appearance of the car has been maintained which means the production Mazda2 has a lot of potential in terms of design and it should turn out to be one of the prettiest models in this challenging segment.

The concept shown by Mazda at the Swiss show is 4,070mm long, 1,730mm wide and 1,450mm tall so we get an idea of how big the new "2" will be. It should be noted the concept has a 2,585mm wheelbase and is powered by a new 1.5-liter SKYACTIV Euro 6-compliant turbodiesel engine coupled to 6-speed automatic transmission. This hardware arrangement will probably find its way inside the production model and will enable the Mazda2 to have CO2 emissions of less than 90 g/km.