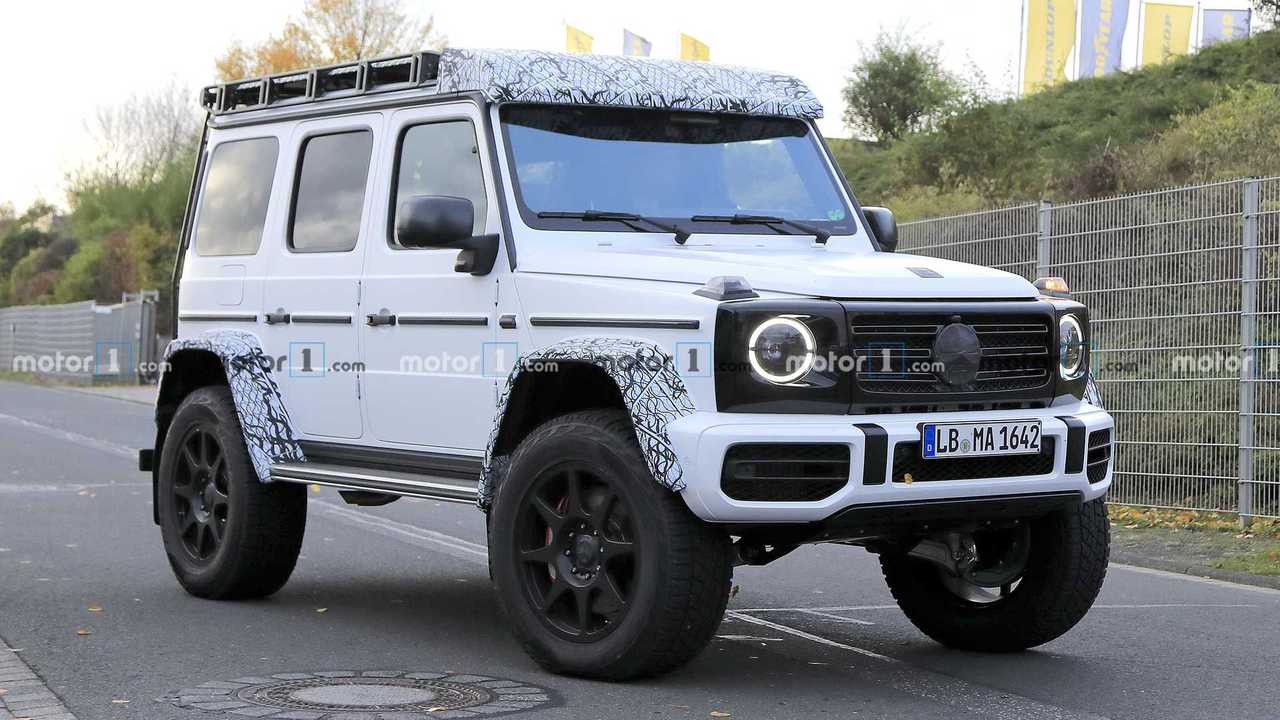 The prototype had a roof rack accessible by climbing the rear ladder.

Daimler CEO Ola Källenius recently admitted Mercedes “went a bit too far to cover each and every space into each and every segment,” promising to analyze the lineup and see whether there are some models that could be dropped. These new spy shots of a jacked-up G-Class 4x4 are in direct contradiction with the head honcho’s statement since it isn’t an essential model, but the Squared was likely approved a long time ago.

You might not be a fan of Mercedes’ SUV onslaught, but you have to admit the three-pointed star knows how to make a seriously cool sport utility vehicle. The G-Class 4x4 Squared is perhaps the most relevant example, standing tall with its portal axles giving it all the ground clearance you could ever need. The camouflage applied on the sides is pointless because we can clearly see the beefy wheel arches making room for those chunky tires.

A rear-mounted ladder provides access to the roof rack, which looks oddly familiar as we’ve seen a similar (if not identical) setup on the bonkers Brabus 800 Adventure XLP – a rugged G63 turned into a pickup truck. For whatever reason, Mercedes decided to camouflage the front section of the roof rack, which makes us think it might incorporate some auxiliary lights. There’s more disguise at the back on the spare wheel, although we’re not sure why since it can’t possibly hide anything important.

Considering the prototype lacks the AMG G63’s Panamericana grille, we’re tempted to believe the new G-Class 4x4 Squared is based on a Benz-branded model. It could be built around the G550 like its predecessor, which although not an AMG, is not too shabby with its twin-turbo 4.0-liter V8 producing 416 horsepower and 450 pound-feet (610 Newton-meters) of torque.

This test vehicle seems just about ready to drop the little camo it has, so look for a debut to take place in the coming weeks or months. Details about how much it will cost are not available for the time being, but you can imagine it will set you back significantly more than the $130,900 Mercedes wants for a standard G550 in the United States. As a refresher, the old G550 4x42 started off at an eye-watering $225,000, so you basically had to pay AMG G65 money.

A new G-Class Squared is nice and all, but what we really want to see is another ludicrous G-Class 6x6 behemoth with three axles. Mercedes is certainly a fan of these lifted off-roaders, having developed one-offs like the EQC 4x4² and my personal favorite – the E-Class All-Terrain 4x4².