Well, that want’s even close.

American SUVs aren’t famous for their quick zero-to-60 times and cornering capability. They’re powerful, a prerequisite for success in the US, but a bit sloppier than their German counterparts. No one would associate the Chevy Tahoe with being fast, though SUVs and crossovers are tiptoeing their way to offering supercar leaves of performance, like the Audi RS Q8. However, the two couldn’t be more different, and that’s evident on the race track.

Hennessey Performance has a new YouTube video that pits a stock Tahoe against a stock RS Q8, which is an odd pairing when you look at each’s spec sheets. The RS Q8, using the twin-turbo 4.0-liter V8 from the Lamborghini Urus and other VW Group SUVs, produces 591 horsepower (441 kilowatts) and 590 pound-feet (800 Newton-meters) of torque. The Chevy Tahoe High Country comes with a naturally aspirated 6.2-liter V8 producing 420 hp (313 kW) and 460 lb-ft (623 Nm) of torque.

Unsurprisingly, it’s no contest. The first race has the Audi blowing past the Chevy without care given to the American model, the Audi’s extra power and Quattro all-wheel-drive system helping rocket it past the Tahoe. The second race gave the Chevy a running start while the Audi began from a dead stop. However, this didn’t matter. The Audi quickly caught up and sped past the Tahoe long before crossing the finish line. 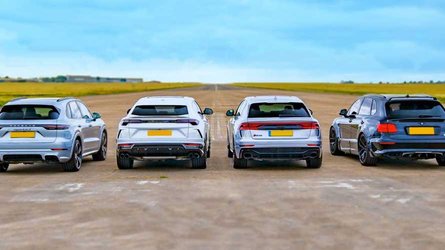 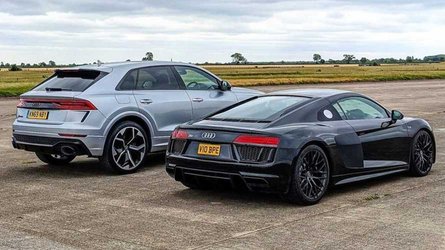 Does The Audi RS Q8 Stand A Chance In A Drag Race Against The R8?

It’s odd to see a pair of stock cars racing with Hennessey behind the wheel, but the company discovered that it couldn’t easily tune the Tahoe’s 6.2-liter V8. That makes giving it 600 or 700 horsepower impossible, which would have helped make this race more even. However, the company can and will help you upgrade the RS Q8 or the Lamborghini Urus. We expect to see a high-powered Audi soon.