Even though it was introduced only several months ago, the new Ford Bronco has already spawned quite a few concepts. While the ones we’ve seen so far cater to outdoorsy people and their overlanding necessities, the Wildland Fire Rig has a different application. Developed in collaboration with Filson, the off-roader has been turned into an emergency vehicle to support the National Forest Foundation.

The Bronco has a long tradition when it comes to fulfilling duties as an emergency and rescue vehicle, going back to the first-generation model modified for the Forest Service. This new concept wears a Forest Service Green paint job as a nod to its forebearer and comes equipped with actual firefighting equipment. It started off as a four-door Bronco Badlands with the Sasquatch Package before being turned into a vehicle that can help protect America’s forests.

The list of changes is quite extensive, starting off at the front where the Wildland Fire Rig has a modular steel bumper and a winch. The specialty Bronco has gained a roof rack with an LED light bar, along with firefighting equipment varying from axes and water tanks to a shovel and a chainsaw. To make sure it would be up to the task of putting out fires, Ford installed a high-pressure water pump and a 50-gallon water tank to feed the built-in fire hose reel.

The interior has also been subjected to a few changes, including the use of fireproof nylon for the headliner and rear cargo area divider. The seats are wrapped in black quilted leather and there’s a CB radio on the center console. Rounding off the tweaks are the grab handles finished in green to complement the door bolsters, armrests and seat trim surrounds. 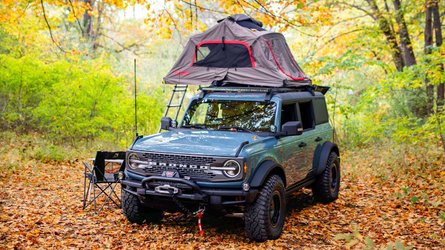 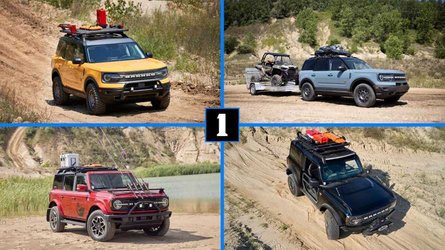 Although a concept, the Wildland Fire Rig is more than just for show as Ford will donate two specially equipped Broncos molded after the concept to firefighting crews. It’s part of the Bronco Wild Fund to support National Forest Foundation and Outward Bound USA, with the goal being to raise up to $5 million annually.

The money will come from a portion of the proceeds from Bronco sales (including Bronco Sport) as well as from Ford-licensed merchandise. In addition, the Bronco Wild Fund has pledged to plant one million trees by the end of next year.