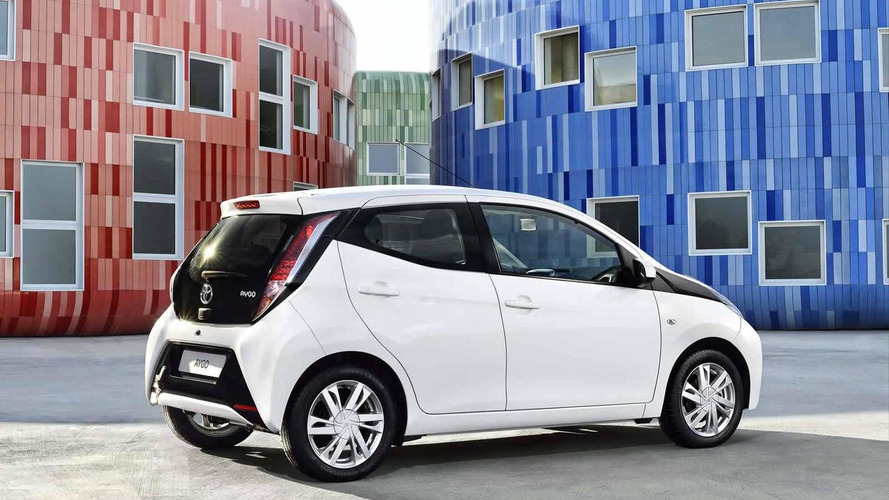 Toyota is exhibiting in Geneva the all-new Aygo together with its French cousins, the second-gen Peugeot 108 and Citroën C1.

Toyota is exhibiting in Geneva the all-new Aygo together with its French cousins, the second-gen Peugeot 108 and Citroën C1.

Looking a bit more upscale than the French duo, Toyota's second generation of the Aygo has grown in length by 25mm to 3,455mm while height has dropped by 5mm to 1,460mm but even so front headroom is up by 7mm. In addition, Toyota decided to widen both front and rear tracks by 8mm and applied a completely different front fascia compared to the new C1 and 108 thanks to an "X" graphic which makes the model look quite interesting and unique.

The revamped Aygo has a sloping beltline and an integral rear spoiler while body style choices will be limited to three and five doors as it seems Toyota hasn't developed an open-top version like its French relatives. At the back we notice a hexagonal tailgate with the bumper extends to the more muscular rear wheel arches making the car look bigger than it actually is.

For the interior Toyota has designed a trapezoidal center console and elongated the cabin by 9mm even though the 2,340mm was left untouched. Also up is the luggage room as the capacity has increased by 29 liters while the firm's newly developed x-touch multimedia system takes care of the entertainment department with a 7-inch touchscreen display offered as standard with a rear view camera.