The company is still looking for an actual production site in the US.

De Tomaso is best known for the mid-engined Pantera sports car that blended a Ford V8 engine and European styling into a potent package. The company made a big comeback in 2019 by unveiling the P72 at the Goodwood Festival of Speed. Now, the automaker has announced plans to build the svelte supercar in the United States.

De Tomaso calls this initiative Mission American Automotive Renaissance, citing a "love for and discontent with the American automotive industry." The company plans to bring all of its core operations into the US, including production, design, and corporate facilities.

De Tomaso is still in the process of finding a new American home. The company indicates that it is in discussions with multiple states about where to go into business. A site announcement should happen in the next six months. Look for the production of the P72 in the US to begin in the fourth quarter of 2022.

The P72 follows in the legacy of previous De Tomaso performance cars by using a Ford-sourced engine. Specifically, it packs a mid-mounted, supercharged 5.0-liter V8 with extra tuning by Rousch to make in excess of 700 horsepower (522 kilowatts) and 608 pound-feet (825 Newton-meters) of torque. The only gearbox is a six-speed manual. 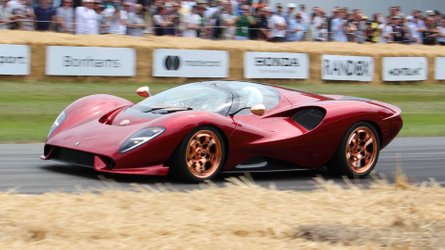 De Tomaso plans to build 72 units of the P72 and start the vehicle's pricing at €750,000 (about $890,000). According to the company's American production announcement, it has "oversubscribed" reservations for the supercar.

In a period during the 1970s and '80s, Detomaso was a major force in the Italian motor industry. The company not only major vehicles as part of its own brand but also owned the automakers Maserati and Innocenti, in addition to motorcycle firms Benelli and Moto Guzzi.